N.B.: This curriculum is no longer being updated, but is retained here for reference.

During Peace Experiments, the kids get to choose which activity they would like to try that week. We gather together in Room 4/5 at 9:45 (when the kids get out of the main service). We have a short opening circle, during which there’s a song or story that everyone does together. We divide kids into different activities, and teachers get the kids by 10:00. Class ends officially at 10:30, though if you need to, you can run late by 5-10 minutes.

Basically, you lead the same activity each week (you’re welcome to modify and improvise, but all we ask is one activity that you lead several different weeks). With busy schedules, most teachers are away at least one of the six weeks, and we plan for that — but please let me know as soon as possible, so I can make sure I have enough coverage for the attendance we expect. Some kids will want to repeat your activity more than one week, which is fine with me, unless you don’t want to. You get to set the size of the group you can accommodate — at least 2 children, but most groups average about 4-6 children.

Special days:
— There will be a petting zoo at UUCPA one of these weeks. When we have that date set, teachers can figure out if they want to take their kids to the petting zoo in the middle of their class, or what.
— There will be the usual May Day celebration (May pole dancing, Morris dancing, ice cream) AFTER Sunday school on May 1, but this will not affect what we do in Peace Experiments.

Safety training: If you have not yet completed UUCPA safety training this school year, I will set up a time for you to do that before Peace Experiments starts (we can do it in person or via Skype).

“We do not want children to belabor the horrors of war…. What we wanted to do, to use military terminology, was to arm them with an inherent sense that peace is possible, that it is exciting and flows outward from our daily habits into the wider world around us.” [from the 1985 Peace Experiments curriculum, p. iv]

Feminist theologies teach us that human beings are embodied beings — there is more to us than our rational selves, and we learn not just through thinking, but also through doing, feeling, and being. Thus, Peace Experiments includes activities that allow children to engage their bodies and minds and souls in activities that help them define themselves as persons who are committed to peace.

We are addressing at least two of the great religious questions in Peace Experiments. First, we are asking, What is the nature of ultimate reality? The answer that we give for this question is complex: although we know that war and violence exist everywhere in our worlds, we believe that peace also exists everywhere, and we hope that we can tip the balance in favor of peace. Second, we are asking of ourselves: Who am I? The answer that we hope to give is that we are persons of peace, who have peace deep in the core of their being.

Peace Experiments feels a little bit like summer camp. As in the Workshop Rotation Method, adult leaders plan one activity that they will do over and over again for the six weeks, while children rotate between these activities.

Peace Experiments 2014
— Crocheting: Learning how to crochet simple projects.
— Baking: Make yummy goodies, and give them away to people during the social hour following Sunday school.
— Non-competitive games: Playing active games that are more complex than mere zero-sum games.
— Non-competitive games: Board and table-top games that do not result in traditional winners/losers.
— Unicycling: Learning how to ride unicycles.
— Helping prepare brunch: Helping to prepare a brunch for the whole congregation, including hard-boiled eggs, waffles, etc.
— Drama: Skits and theatre games on themes of peace.

Above: What some children made during a Baking for Peace session. Photo copyright (c) 2014 Heather Chen.

First, determine how many activity groups you will need to plan. Determine projected attendance for gr. K-5, and figure that you will need one activity group for each six children (some activities will be able to accommodate fewer children, others may need more children). Here’s a sample spreadsheet used to schedule activities:

All K-5 children meet together each Sunday in one room for an opening meeting.

The opening meeting begins with one adult leading a fun activity on the theme of peace. Here are some ideas for successful opening activities:
— Dramatic reading of The Butter Battle Book by Dr. Seuss, followed by a brief discussion
— Singing “Little Rabbit Foo-Foo” together, followed by a question for discussion: What is the moral of this story? Sheet music for “Little Rabbit Foo-Foo” (PDF)

After this opening activity, the adult in charge asks kids which activities they would like to attend, and funnels the appropriate number of children into each group. If there’s not room in a group one week, you can promise them they will be able to try out that activity next week. Some activities work best if the children return week after week (e.g., more difficult skills like crocheting and unicycling); be sure that children who want to return to an activity can do so.

Children go off to their peace activity group for the remainder of the time.

Activity group leaders are responsible for taking attendance in each group.

Children are released to the social hour area to meet their parents when the main worship service has ended. Some activity groups wind up going longer, and parents are directed to appropriate rooms to pick up their children. 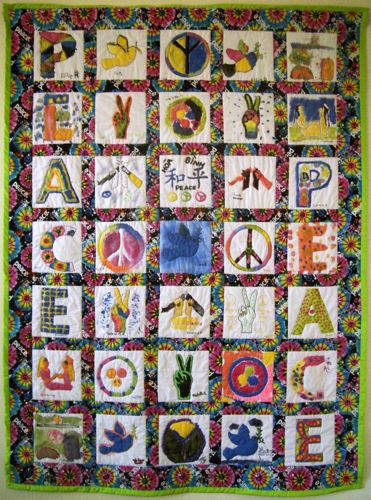 Above: Peace Quilt, 2012. The squares were painted by various children in the program, under the supervision of Carmela Abraham and Kathy Swartz, and the quilt was sewn by Kathy and Tessa Swartz.

INCLUDING OTHER AGE GROUPS

Preschoolers: Kris Geering, M.Ed., has developed a six-week program for preschoolers designed to fit in with Peace Experiments, called “Building Blocks of Meditating.”

High school: During 2014 Peace Experiments, high school age youth met separately and developed a worship service on the theme of peace. On May 18, 2014, they led Sunday morning worship, to which gr. K-8 children were invited. Five members of the youth group wrote reflections on the theme “Talking about Peace.”

In annual evaluations sessions with children, the children remembered many Peace Experiments activities, and rated some of the activities as favorites.

Parents report that children like attending Peace Experiments, and ask to attend Sunday school during the program. In the first year Peace Experiments was implemented at the UU Church of Palo Alto, attendance was up significantly over the same period the previous year.

During Peace Experiments 2014, children were heard to speak regularly about peace, and to associate peace with activities they enjoyed such as riding unicycles, playing non-competitive games, crocheting, baking, etc.

Parents responded positively to the Peace Experiments program. They reported liking the fact that their children had such a positive experience in Sunday school. Some parents also reported appreciating that the congregation addressed the topic of peace and peacemaking.

The adults who taught in the program were generally enthusiastic about their participation. Some of these adults were long-time peace activists, and during the informal activities were able to share their passion for peacemaking with the children.

(1) The Peace Experiments program of the UU Church of Palo Alto was noticed by the magazine Geez: Holy Mischief in an Age of Fast Faith, and written up in their issue devoted to “The rise of the unrecognized peace activist”:

“Dan Harper, a long-time peace activist in California … was a conscientious objector in 1977 and outspoken activist by 1980. Today he’s the associate minister of religious education at the Unitarian Universalist Church of Palo Alto. Now, however, instead of going to peace rallies, he hangs out with children. “I really think it’s the way to change the world,” he told Geez…”

(2) An earlier implementation of this program at First Parish of Watertown [Mass.] drew the attention of the local newspaper: 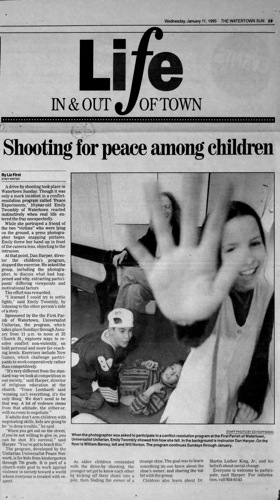 “A drive-by shooting took place in Watertown Sunday. Though it was only a mock incident in a conflict-resolution program called ‘Peace Experiments,’ 10-year-old Emily Twombly of Watertown reacted instinctively when real life entered the fray unexpectedly.

“While she portrayed a friend of the two ‘victims’ who were lying on the ground, a press photographer began snapping pictures. Emily instinctively threw her hand up in front of the camera, objecting to the intrusion.

“At that point, Dan Harper, director of the children’s program, stopped the exercise. He asked the group, including the photographer, to discuss what had happened and why, extracting participants’ differing viewpoints and motivational factors….

“‘I learned I could try to settle fights,’ said Emily Twombly, by listening to the other person’s side of a story….”