Games are listed below with games suitable for younger kids first, then increasing in age.

Then whoever they point at (more or less) becomes the person in the middle of a three-person group that acts out the appropriate thing as follows (see also the drawings):

Elephant: The person in the middle clasps their hands together, puts their elbows together and sticks out their bent arms as if it’s an elephant’s trunk, whlie making an elephant’s trumpeting sound. The people on either side of them hold up their curved arms to make elephant ears.

Rabbit: The person in the middle sticks out their front teeth, and holds up their hands in front of them like rabbit paws. The person on either side holds up one arm straight overhead to make one of two rabbit ears, while thumping their outside leg on the ground. 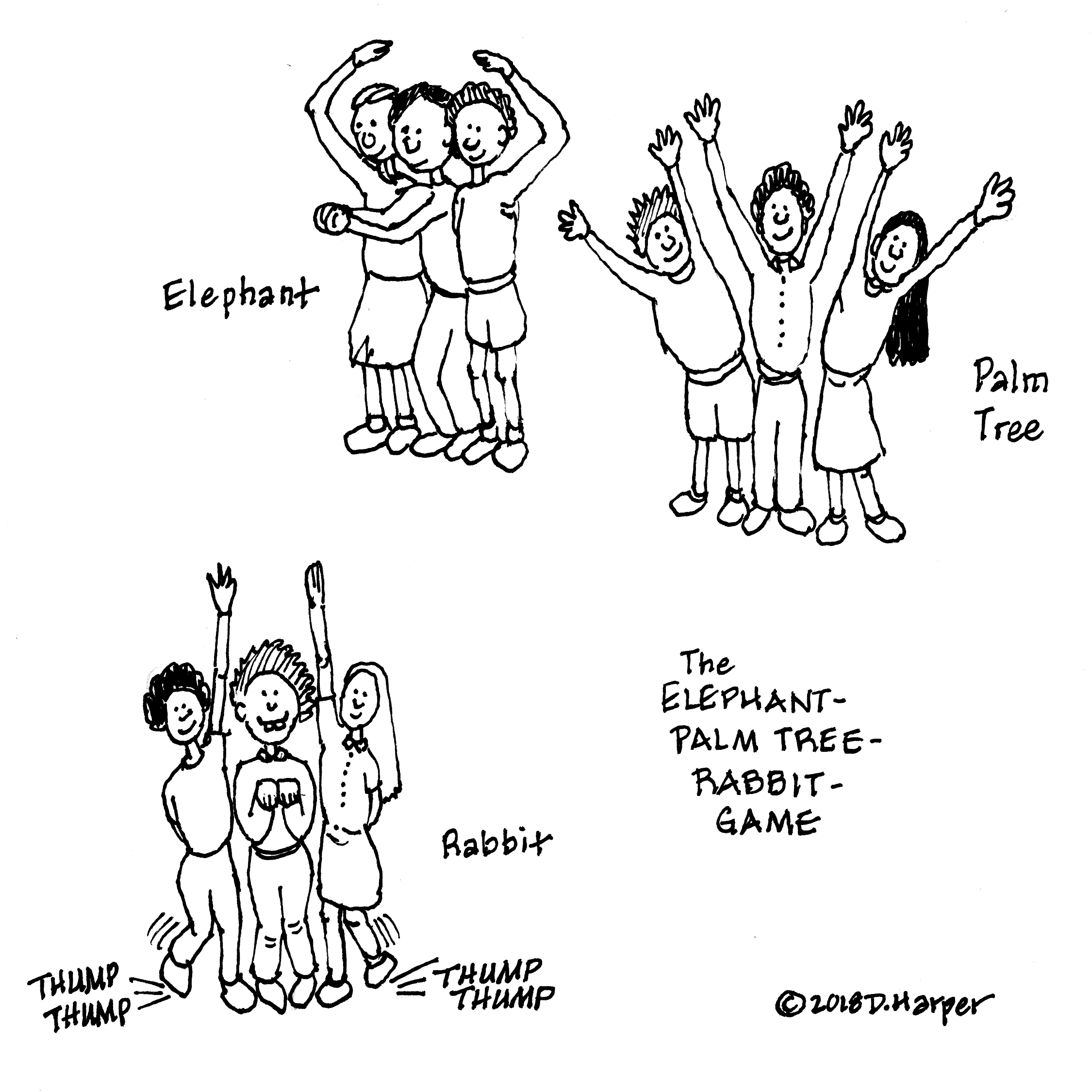 If the three-person group successfully completes either an Elephant, a Palm Tree, or a Rabbit, then the person in the middle closes their eyes and turns slowly around once more to point at someone else. If, however, one of the three people fails to do their appropriate action (or does the wrong action) or fails to make the correct sound in the case of the Elephant, then that person goes in the middle.

What if the person in the middle points exactly in between two people in the circle? Then BOTH of those two people form the center, and the people on either side of them form the outside parts.

Variation for younger kids: First, you might want to practice each of these three-person groups several times, till they get the hang of each grouping. Have one of the adults be the person in the center of the circle, with their eyes open, pointing to different children (this way, the adult can decide which child to point out, so everyone gets a turn, and perhaps passing over children who obviously don’t want to be the person in the middle). If someone fails to do the correct motion, simply help them figure it out (i.e., they don’t have to go in the middle).

Barnyard Game (ages 5 and up)

For 8 or more players, use four animals, e.g., Cats, Geese, Goats, and Chickens.

Fox and Squirrel (ages 6 and up)

You’ll need: two soft, tossable objects, such as: foam balls like “Nerf” balls; big soft sponges like the ones used to wash cars; etc. The two objects should not look alike, so it’s really easy to tell them apart during the game.

Everyone sits or stands in a circle. Be sure that each player can see everyone else.

No one really wins this game. It’s just a lot of fun to play.

You’ll need: 3 parallel lines, two goal lines and a center line, which you can mark with pieces of rope on the ground, or with cones, or whatever. The lines should be spaced evenly apart, with a good distance from the center line to each goal line.

Divide the group into two teams.

The two teams huddle at separate ends of the play area. One team, Team One, decides on a job or profession they will act out. Then they decide on a place that job or profession is associated with, e.g.: lawyers and Washington, D.C.; corn farmers and Iowa; actors and Hollywood; etc.

When both teams are ready, they line up at opposite ends of the play area.

While taking a step towards the center line, team one calls out, “Here we come!”

Team two takes their own step towards the center line, and responds, “Where ya from?”

Team one takes step, says, “Washington! [or wherever the place is that they’ve chosen]”

Team two takes step, says, “Well show us some if you’re not afraid!” At this point, both teams should be lined up face-to-face on either side of the center line (so take big steps in a big space, smaller steps in a smaller space). Members of team one begin acting out their trade; members of team two try shout out their guesses as to what that trade might be. When a member of team two guesses correctly, team one runs madly back to their starting line, while team two tries to tag them.

All those who get tagged before getting back across the starting line are now part of team two. And now team two huddles to decide on what profession or job they will act out….

Variation for quieter game, or small space: Instead of running back to starting line, members of the team being chased have to squat down and touch both palms to the floor before being tagged.

Bear, Salmon, Mosquito (ages 8 and up, or mixed-age groups with younger kids)

You’ll need: 3 parallel lines, two goal lines and a center line, which you can mark with pieces of rope on the ground, or with cones, or whatever. The lines should be spaced evenly apart, with at least 20 feet from the center line to each goal line.

Divide the players into two teams. (You may want to have a Referee to get things organized, and do the chant — it’s up to you.)

For each round of the game, each team goes into a huddle by their own goal line. As a group, they decide whether they will Bear, Salmon, or Mosquito. They should also decide on a back-up.

Then each team lines up BACK TO BACK at the center line. Then everyone chants “Bear! Salmon! Mosquito!” As soon as the chant is done, everyone spins around to face the other team, taking on the pose of whatever they decided on:
BEAR: growl and stretch hands up like claws
SALMON: make a fishy-face and move hands like fins
MOSQUITO: biting motions with your mouth, flap arms as wings

Then whichever team wins starts chasing the other team — Bear eats Salmon; Salmon eats Mosquito; Mosquito eats Bear. The teams that loses tries to get back to their goal line without being tagged. Anyone who is tagged joins the other team.

Keep playing until everyone is on one team, or until exhausted.

Note: Younger kids will need time to get used to the rules of this game. Plan on playing it with them more than once — this game will be a lot more fun for them the second time you play it.

Sit in a circle, on chairs or pillows or something to mark seats. The circle roughly constitutes an evolutionary ladder, rising from primitive organisms to more sophisticated organisms. Divide the circle into four roughly equal segments. The first section will contain primitive organisms; the second section, plants; the third section, herbivores; the fourth section, carnivores.

Within each section, each person chooses an appropriate organism, and then comes up with a simple motion to represent that organism (for example, the lowest organism, by tradition, is always Pond Scum; and the motion for Pond Scum is to hold your left hand out in front of you as if you were holding a cup with your fingers curled to touch your thumb, while above that hand and not quite touching you hold your right hand flat and palm down, moving it in a small circle over the left hand). Once you’ve gone all around the circle, go around again so everyone can try to remember all the organisms and their associated motions.

Now if anyone hesitates, or uses the wrong motion with the name of the organism, or says an organism that isn’t part of that particular game, or otherwise stumbles in the estimation of the other participants, then he or she must go to the bottom of the evolutionary ladder, taking the seat of Pond Scum. Which means that whoever is sitting in the Pond Scum seat then moves up one place on the evolutionary ladder, adopting the name and motion of the organism for that particular seat. And other people also move up until everyone below the person who made the mistake has taken a new seat. That concludes one round.

Whoever is sitting in the seat at the top of the evolutionary ladder commences the next round. Continue playing until bored.

Strategy: Usually, you will want to send the play to people above you in the evolutionary ladder, because the only way you get to move is by getting one of them to make a mistake. However, it can also be effective to look at someone as if you’re going to send the play to them, but then name another organism — with the hope of faking them out so that they start to respond, which could be reason for the other players to send them to the bottom of the evolutionary ladder.

Background: This game has no basis in actual biology at all. I mean, that should be obvious, but with all the misunderstanding the creationists have created over evolution, it seemed wisest to state it explicitly.