Back to the Table of Contents | On to Session Four

DEMETER AND THE BABY

Doso immediately began her duties as a nurse, taking care of Demophoon, the infant son of Metaneira and Celeus. With Doso as his nurse, the child grew like some immortal being. This was because during the day, when no one was watching, Doso secretly anointed him with ambrosia, one of the foods of the gods. And as she held him at her breast, she breathed sweetly on him, and that too helped him to grow like an immortal.

At night, when Metaneria and Celeus were fast asleep, Doso did something that required even more secrecy. She went to the hearth, where the fire burned all night, and placed Demophoon in the fire. Because she was a goddess, the fire did not hurt the baby. Instead, the fire worked a great wonder in the child, and he grew beyond his age, and his face looked like the face of one of the gods. 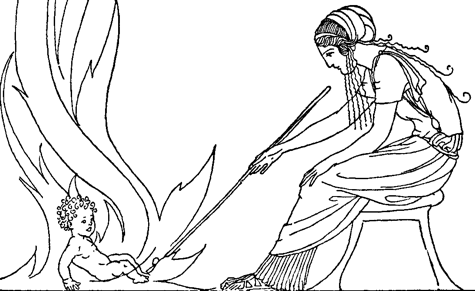 But Metaneira suspected that Doso was doing something to the boy in secret. So one night, she kept watch on Doso from the door of her bed chamber. When she saw Doso put Demophoon into the fire, she feared for her son’s life, and cried aloud in her fear.

“Demophoon, my son,” she cried, “why is this strange woman burying you deep in the fire?”

Doso heard her cry out, and grew terribly angry. With her divine hands, she snatched the child from the fire, and cast him from her to the ground.

“You mortals are witless!” she said to Metaneira. “You are utterly unable to understand whether good or evil comes upon you. For now in your heedlessness you have been foolish past healing. I swear by the relentless water of Styx, which is the most sacred oath of the gods and goddesses, that I would have made your dear son so that he would never age all his days. I would have made him so that he would never die. I would have bestowed on him everlasting honor. This is why I put him in the fire. Now, because of what you have done, he can never escape death and age.

“Yet even so I have made sure unfailing honor will always be his, for he lay upon my knees and slept in my arms. Lo! I am Demeter, who is the greatest help and cause of joy to the undying gods and mortal humans.”

As she spoke, the goddess changed her appearance, thrusting old age away from her. Beauty spread round about her and a lovely fragrance was wafted from her sweet-smelling robes. Rich golden hair spread down over her shoulders. A light shone from her, so that the house was filled with brightness as with lightning. Metaneira knew that a goddess stood before her.

“Now let all the people build me a great temple,” said the goddess. “Let there be an altar below it, and beneath the city and its sheer wall upon a rising hillock above Callichorus. And I, Demeter, myself will teach my rites, that hereafter you may reverently perform them and so win the favor of my heart.”

And with that, Demeter went out from that palace, never to return to that house.

Metaneira’s knees gave way, and she remained speechless for a long time. She did not even think to pick up her son from the ground.

But her daughters heard the baby boy’s pitiful wailing and sprang down from their well-spread beds. One of them took up the child in her arms, while another revived the fire, and a third rushed with soft feet to care for their mother. And they gathered about the struggling child and washed him, embracing him lovingly.

But Demophoon cried and would not be comforted. The nurses and handmaids who were holding him now were much less skillful than the goddess Demeter!

As soon as dawn began to show, Metaneira and her daughters told their father Celeus the whole story. They told him that the lovely-crowned goddess Demeter had charged them to build her a temple. So Celeus called the countless people to an assembly and bade them make a goodly temple for rich-haired Demeter and an altar upon the rising hillock. Before long, the temple was built, and it is said that Demeter herself was pleased with it.

As for the child, Demophoon grew like an immortal being.

And as for Demeter, she remained in her temple at Eleusis, still angry with Zeus. 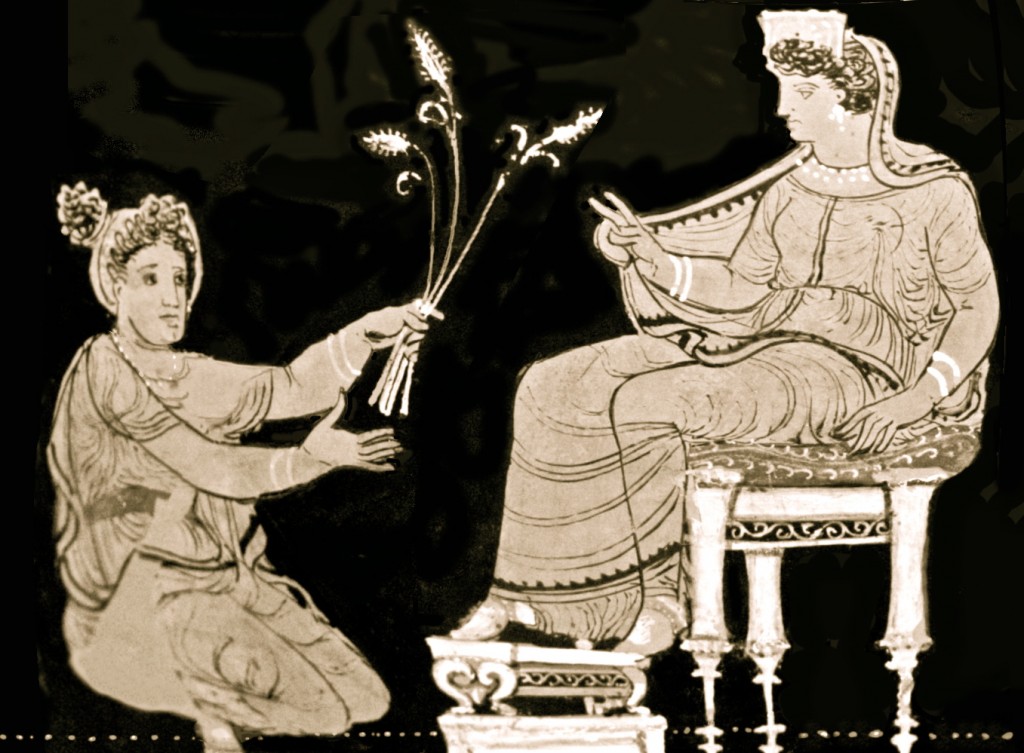 Above: Metaneira (at left) offering a sheaf of wheat to Demeter, who is seated on a throne (from a red figure hydra by the Varrese painter, c. 340 BCE, now in the Altes Museum in Berlin; public domain photo from Wikimedia Commons)

Taken from the Homeric Hymn to Demeter. Our version of this story was adapted by Dan from a public domain translation of the Hymn from Hesiod: The Homeric Hymns and Homerica, trans. Hugh G. Evelyn-White (Cambridge, Mass.: Harvard University Press, 1914), pp. 288-325. We also referred to a more recent translation, The Homeric Hymns: A Translation with Introduction and Notes by Diane J. Rayor (Berkeley: University of California Press, 2004), pp. 17-34.

II/ Read the story “Demeter and the Baby.”

Briefly review the story from last week: After her daughter Persephone disappeared, the goddess Demeter disguised herself as a mortal human being, an old woman named Doso. She went to the city of Eleusis, and there she was welcomed by the daughters of Metaneira, queen of Eleusis. Demeter, disguised as Doso, told Metaneira a tale about being abducted by pirates. Feeling sorry for her, Metaneira gave Doso a job taking care of her baby boy, Demophoon.

Now read the story above.

Many of the children will have become familiar with the idea of acting out a story in previous Sunday school classes. This is a great story to act out!

Get ready to act out the story. Determine where the stage area will be. If there are any children who really don’t want to act, they can be part of the audience with you; you will sit facing the stage. Before acting out the story, talk with the actors (and the other children) about a few things:

(1) Whoever is going to act out the part of the baby should remember that being put in the fire would not have hurt the baby, since he was being protected by the goddess Demeter — would the baby feel good in the fire, and if so how would he show that?
(2) During the story, Demeter puts away her disguise as an old woman, and once again becomes a powerful goddess. How will the actor who takes the part of Demeter show this transformation?
(3) What feelings do you think Metaneira would have felt when she came upon Doso? At first she might have been frightened to see her son in the fire; then relieved that her son was out of the fire; then dismayed to find out that Doso was really the goddess Demeter; and son on. What were all the feeling Metaneira went through? How can the actor show those feelings?

Once you’ve talked these things over, try acting out the story.

Tell the children the following:

“In last week’s story, we heard another part of this myth. When Demeter and Metaneira first meet, here’s what happened:

“‘Metaneira filled a cup with sweet wine and offered it to Doso. But she refused it, for she said it was not lawful for her to drink red wine, and she asked them to mix meal and water with soft mint and give that to her to drink. Metaneira mixed the drink and gave it to the goddess as she bade. The great queen Demeter, still in her guise as Doso, took the drink — and this simple act later became one of the most important rituals in the temple to Demeter that was built in Eleusis.’

Once you have said this (or something like it), ask the children to think about this myth. Why do you think Demeter wanted to make the human baby immortal? And why did Demeter stop making the baby immortal, and instead tell the humans to build her a temple? In short:

(1) Why do you think Demeter behaved the way she did?

Ask the children to THINK for a few moments (maybe ten to fifteen seconds) about how they would answer this question.

After the discussion, if you still have time, have the children sit down around a table. Tell the group that you’re all going to draw a scene from the story. But first, talk about what the various scenes of the story are. Some of the scenes you might think of:
— Demeter anointing Demophoon with ambrosia
— Demeter holding Demophoon in the fire
— Metaneira surprising Demeter as she holds the baby in the fire
— Demeter yelling at Metaneira
— Etc.

Come up with a nice long list of scenes. Have each child (and adult) in the group choose one scene to draw. Assure the children that the idea is not to produce great drawings — instead, the idea is to produce a comic-book-like series of drawings that tell the story.

As you all draw, perhaps the conversation about this strange story will continue.

If you need to fill more time, you could play a game of some kind, or some other fun activity. Just make sure you have everyone come together for a closing circle before you’re done.

When the children are in a circle, ask them what they did today, and prompt them with questions and answers, e.g.: “What happened in the story we heard today? What did Demeter do, and why? etc.” You’re not trying to put any one child on the spot, but rather drawing on the wisdom of the group as a whole. If any parents have come to pick up their children, invite them to join the circle (so they can know what it is their children learned about this week).