Back to Table of Contents | On to Session 2

THE MOON AND THE HARE: A STORY FROM THE SAN PEOPLE

This story was originally told by a man named Dia!kwain, who lived in the southern part of Africa over a hundred years ago, and spoke the |Xam language.

The |Xam language used “click” sounds. Here’s how to pronounce the click sounds taht appear in this story:

The symbol | represents a dental click — you make this sound by pressing the tip of your tongue against your upper front teeth, and withdrawing it suddenly.

The symbol ! represents a “cerebral click” — you make this noise by curling up the tip of your tongue against the roof of your mouth, and withdrawing it suddenly.

The symbol || represents a lateral click — you cover the whole roof of your mouth with your tongue, and make the click noise as far bak in your mouth as possible. (People who rider horse sometimes use a similar sound to urge a horse forward.)

The |Xam language is now extinct — that is, there is no one left alive who grew up speaking this language. The people who once spoke |Xam are part of a larger ethnic group commonly referred to as “Bushmen,” although it’s more proper to call them the San people.

This story is one of their folk tales.

The Moon and the Hare: A story about How Death Came into the World

When the San people first saw the new moon, they would look towards it, and put their hands over their eyes, and say this:

“Star, O Star, yonder in the sky!
Take my face there. You shall give me my face there.
When you have died, Moon, you return, alive again;
We no longer saw you, and then you came again.
Take my face that I may resemble you.
You always return, alive again, after we lose sight of you.
It was the hare that told you that you should do this.
It used to be that you told us that we also should return,
Alive again, after we had died.”

Having said this prayer, once a man of the San people named Dia!kwain followed the prayer by telling this story:

In the beginning, the hares looked much like a human beings. And when they died, they did not die forever, for after a time they would return to living once again.

There was a young male hare whose mother died. She would not return to life, for she was altogether dead. Seeing this, the hare cried out for his mother.

“I am not willing to be silent,” said the hare. “You are wrong. I know that my mother will not become alive again. She is altogether dead.”

The Moon became angry that this young hare should speak this way, and not agree with what the Moon said. So the Moon hit the hare in the mouth, splitting the hare’s lip. “The hare’s mouth shall always be like this,” said the Moon. And the Moon gave the hare the form that all hares have today, with a lip that is in two parts, and longs legs for running.

“The hare shall always bear this scar on his face,” said the Moon. “And the dogs shall always chase him, and he shall have to spring away, doubling back and forth as he tries to run away. If the dogs catch him, they will bit him and tear him to pieces, and he will altogether die, and never return to living once again.” 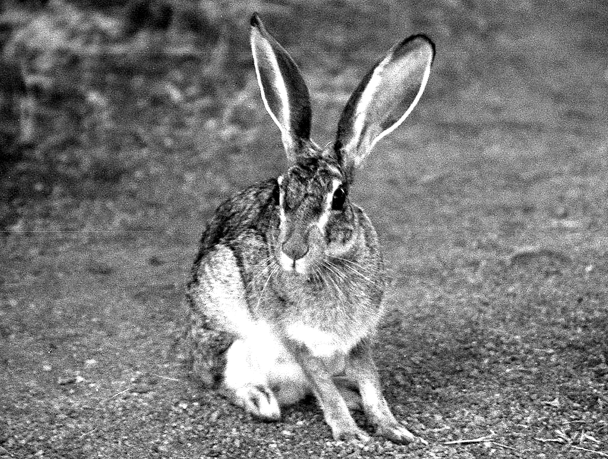 “I told the hare,” the Moon went on, “that all people should be like me, and do that which I do. When I am dead, I return, and once I return I am living once again. But the hare contradicted me, when I told him that.”

And the Moon spoke further, saying: “Ye who are people, when ye die ye shall altogether vanish away. Before I said that when ye died, ye should again arise, ye should not altogether die — just the way that when I die, I again return living. I had intended that ye who are people, ye should resemble me and do the things I do. I had thought that I would give you joy. But the hare, when I tried to tell him about this — when I tried to tell him that his mother had not really died, but that she only slept — the hare was the one who said that his mother did not sleep, that she had altogether died. This is what I became angry about, for I thought the hare would say, ‘Yes, my mother is just asleep’.”

Because of the hare, the Moon cursed him, and cursed all people, all of us. And this is the story that tells why when we died, we die altogether, never to return.

The storyteller Dia!kwain went on to add: 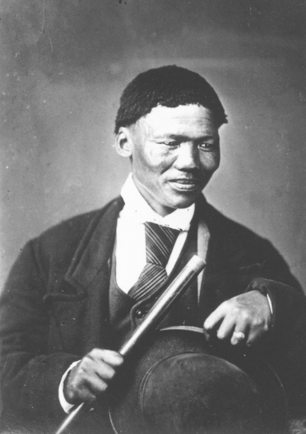 Above: A photo of Dia!kwain. (Public domain image.)

This story comes from “The Origin Of Death; Preceded By A Prayer Addressed To The Young Moon,” Wilhelm Heinrich Immanuel Bleek, Lucy C. Lloyd, Specimens of Bushman Folklore (London: George Allen & Co., 1911). I stuck to this original text, a translation of the original |Xam language, as much as possible, but rearranged the story and removed some redundancies to conform to narrative norms of written English.

The story was dictated to Bleek and Lloyd in 1875 by Dia!kwain: “Dia!kwain gives fifteen pieces, which are in the Katkop dialect, which Dr. Bleek found to vary slightly from that spoken by ||kabbo and |a!kungta. He came from the Katkop Mountains, north of Calvinia (about 200 miles to the west of the homes of |a!kungta and ||kabbo). He was at Mowbray from before Christmas, 1873, to March 18th, 1874, returning on June 13th, 1874, and remaining until March 7th, 1875” (from the Preface).

The descriptions of how to pronounce the click sounds is also taken from this book (see pp. vi. ff.).

Session One: A story from the San people

II/ Read the story “The Moon and the Hare.”

III/ Act out “The Moon and the Hare.”

Ask: “Who are the characters in this story?” (In this story, the Moon and the Hare are both characters; you could also include the dead mother hare as well.)

Since this is such a simple story, you may want to act it out twice, with different sets of actors each time.

Be sure to bring a digital camera (e.g., your cell phone), and take photos of the children acting out this story. Print out these photos, and post the best ones on the class bulletin board to remind the children of this story.

In case someone hasn’t yet understood, explain that the Moon goes through phases, and every twenty-eight days it is not visible in the night time sky. We call this the “new moon,” while the San thought about it as though the moon dies and then comes back to life.

If you have time, ask the children to draw pictures of the Moon and the Hare, so you can put some pictures up on the bulletin board in your classroom.

When the children are in a circle, ask them what they did today, and prompt them with questions and answers, e.g.: “What did we do today? We heard a story, right? Anyone remember what the story was about? It was about the Moon and the Hare, etc.” You’re not trying to put any one child on the spot, but rather drawing on the wisdom of the group as a whole. If any parents have come to pick up their children, invite them to join the circle (so they can know what it is their children learned about this week).