Adobe-type bricks, made out of clay soil, have been a basic building material since ancient times. Making bricks is a fun, messy, physical project. Here’s our process for making bricks, as done by Jenny Robertson in 2013:

1. Clay soil — we got our soil for free by posting a request on Craigslist (you may wish to get a sample first to make sure it will make good bricks; some clay soils crumble after they dry out; when you find a good source, get several big big tubs of it)
2. Half a bale of straw (note that straw works better than hay) — it can be old cruddy straw, don’t feel you have to go out and buy fancy new straw
3. Measuring cups — large heavy plastic cups of about 16 oz. capacity work well.
4. Mixing trays — gray restaurant busing trays work well
5. 5-gallon bucket of water, out of which you can scoop water using the measuring cups
6. A hose, both for a water source, and for cleaning hands and feet 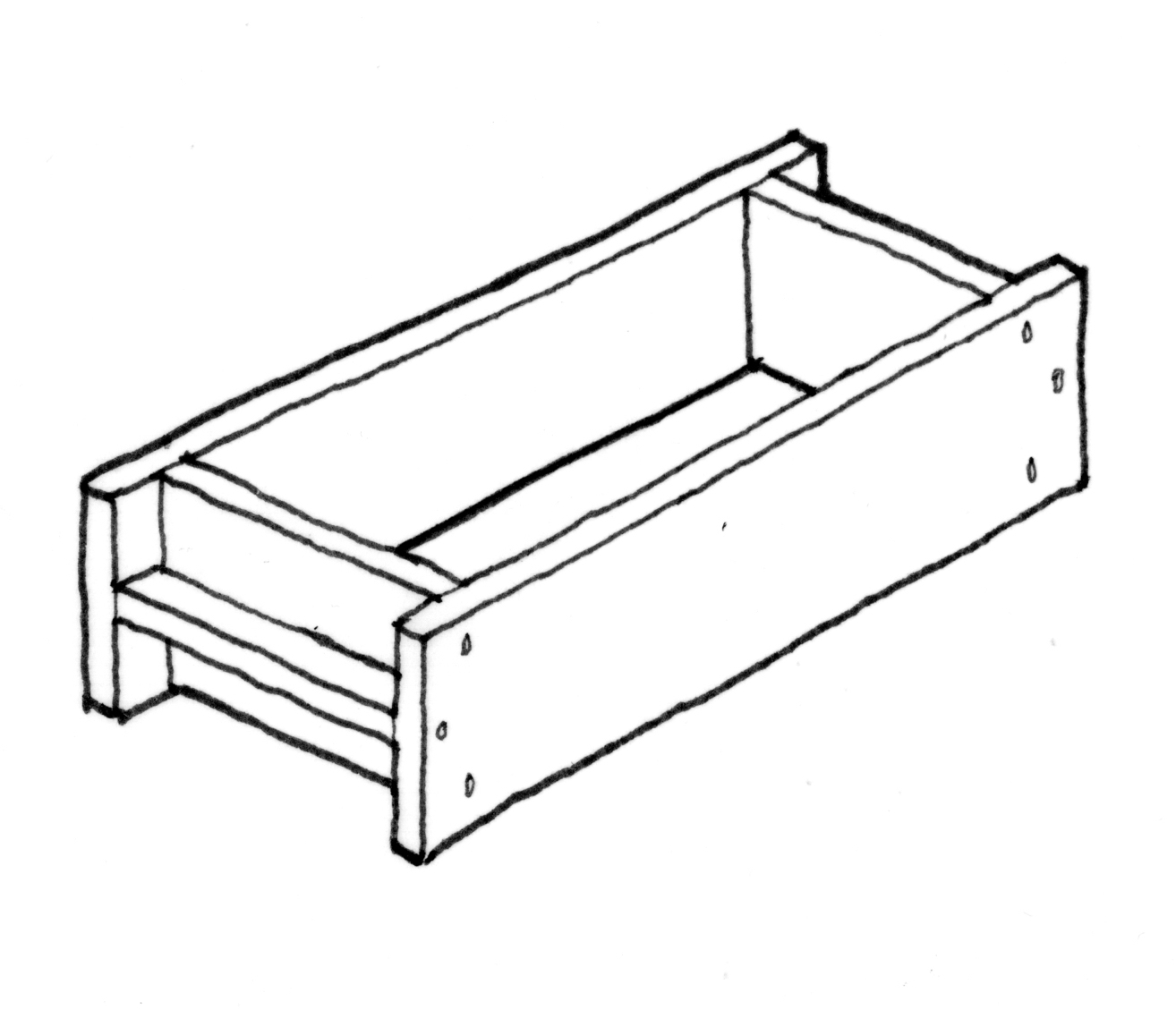 Make up a visual recipe on a large sheet of paper, something that pre-literate children can understand. Post this recipe where kids can refer to it while they work. A basic recipe is 2 parts soil, 1 part water, 1 part straw.

The “apprentices” work in pairs to measure the soil and water, and then mix it using hands or feet. When soil and water are mixed, then they mix in straw.

Put the mold somewhere where it will be sheltered from rain (not a big problem for us in late spring in California, but your climate may differ). Wet the mold. Pack the completed mix into the molds. Let it dry — in our relatively dry climate, it took a week for the bricks to get really hard and dry.

Adobe bricks continue to be used throughout the world today, especially in areas with dry climates where it makes more sense to make your own building materials rather than purchase them. There’s an extended discussion of how to make adobe bricks in The Barefoot Architect: A Handbook for Green Building by Johan van Lengen (Bolinas, Calif.: Shelter Publications, 2008), beginning on page 298.

Brickmaking is mentioned several times in the Hebrew Bible. In the Torah, the book of Exodus, chapter 5, the story is told of how when the Israelites were living in Egypt, they had to make bricks for the Pharaoh. But when they asked for a few days off to go worship their god, Pharaoh decided they had too much down time, and piled more work on them. Here’s the story, somewhat edited for clarity:

Moses and Aaron went to Pharaoh and said, “Adonai, the God of Israel, says, ‘Let my people go, so that they may celebrate a festival to me in the wilderness.'”

But Pharaoh said, “Who is this Adonai, that I should heed him and let Israel go? I do not know the god of the Israelites, and I will not let the Israelites go.”

Then Moses and Aaron said, “The God of Israel has revealed himself to us; let us go a three days’ journey into the wilderness to sacrifice to the Adonia, our God, or he will fall upon us with pestilence or sword.”

But the king of Egypt said to them, “Moses and Aaron, why are you taking the people away from their work? Get to your labors! Now your people are more numerous than us Egyptians, and yet you want them to stop working!”

That same day Pharaoh commanded the taskmasters of the people, as well as their supervisors, “You shall no longer give the people straw to make bricks, as before; let them go and gather straw for themselves. But you shall require of them the same quantity of bricks as they have made previously; do not diminish it, for they are lazy; that is why they cry, ‘Let us go and offer sacrifice to our God.’ Let heavier work be laid on them; then they will labor at it and pay no attention to deceptive words.”

So the taskmasters and the supervisors of the people went out and said to the people, “Thus says Pharaoh, ‘I will not give you straw. Go and get straw yourselves, wherever you can find it; but your work will not be lessened in the least.'”

So the people scattered throughout the land of Egypt, to gather stubble for straw. The taskmasters pressed them hard, saying, “Complete your work, the same daily assignment as when you were given straw!”

And the supervisors of the Israelites, whom Pharaoh’s taskmasters had set over them, were beaten, and were asked, “Why did you not finish the required quantity of bricks yesterday and today, as you did before?”

The Israelite supervisors came to Pharaoh and cried, “Why do you treat your servants like this? No straw is given to your servants, yet they say to us, ‘Make bricks!’ Look how your servants are beaten! You are unjust to your own people.”

He said, “You are lazy, lazy; that is why you say, ‘Let us go and sacrifice to Adonia.’ Go now, and work; for no straw shall be given you, but you shall still deliver the same number of bricks every day.”

The Israelite supervisors saw that they were in trouble when they were told, “You shall not lessen your daily number of bricks.” As they left Pharaoh, they came upon Moses and Aaron who were waiting to meet them. They said, “Adonai look upon you and judge! You have got us into trouble with Pharaoh and his officials, and have put a sword in their hand to kill us.”