Back to the Table of Contents

THE PUNISHMENT OF PROMETHEUS

Once upon a time, the immortal god Prometheus stole fire from the other immortal gods and goddesses, and gave it to mortal human beings.

Zeus, who had just become the new ruler over all the other gods and goddesses, was very angry. To punish Prometheus, Zeus commanded him to be nailed to a cliff in Scythia, a distant place at the end of the world. Zeus told two of his henchmen, a demon named Might and another demon named Violence, to take Prometheus to Scythia. Prometheus had taken the fire from Hephaestus, who was the god who made things out of metal for the other gods and goddesses at his forge, so Hephaestus had to go along to make shackles of bronze to hold Prometheus tightly against the rocks.

After traveling many miles, at last they came at last to a high and lonely cliff. Hephaestus began working while Might and Violence watched to make sure Prometheus didn’t get away.

“I don’t have the heart to bind another god in this desolate place,” said Hephaestus to Prometheus, as he hammered bronze nails into the cliff face. “Yet I have to do it because it’s dangerous to ignore the commands of Zeus. Prometheus, I don’t want to do this to you. The sun will scorch you during the day, and the cold will freeze you at night. Each day, an eagle will come and tear out your liver, and because you are immortal, your liver will regrow each night.” 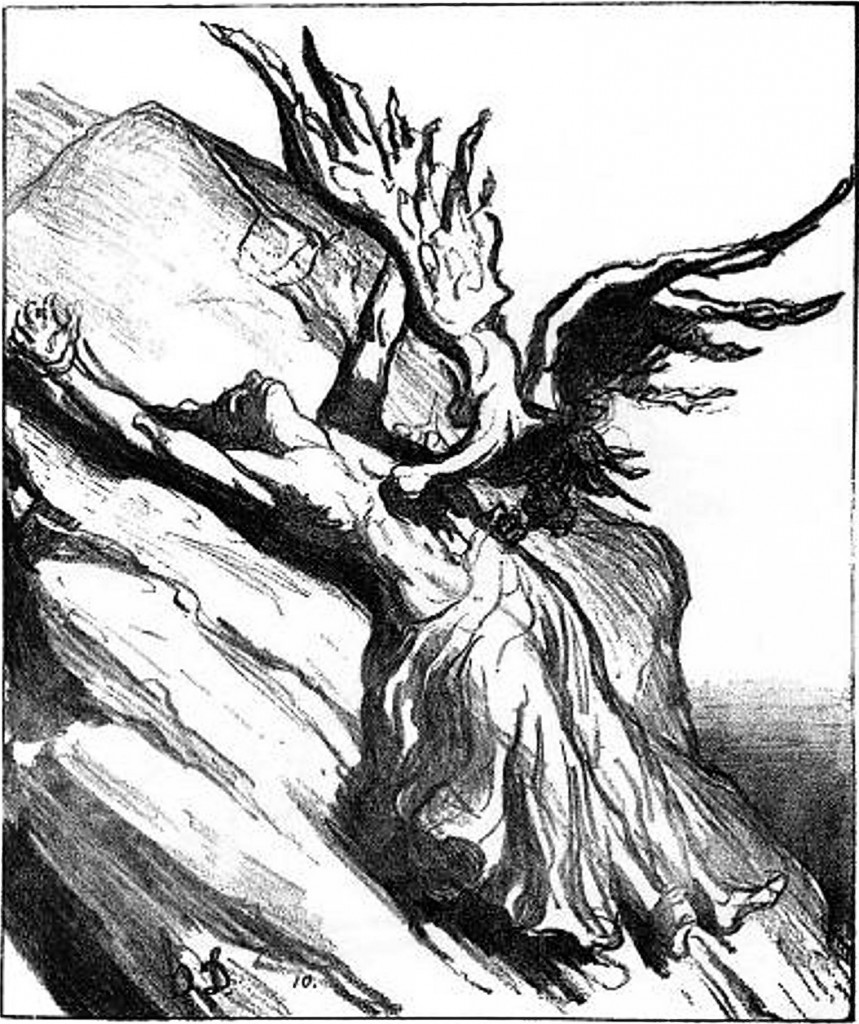 Above: Prometheus after he had been chained to the cliff face, with the eagle eating his liver, as imagined by the French artist Honore Daumier

Hephaestus paused to wipe the sweat from his forehead. “This is what has happened because you opposed the will of Zeus. This is what you get for giving fire to the human beings. Zeus is a new ruler, and new rulers are harsh.”

“Why are you delaying?” said the demon named Might. “Why do you pity this god who has betrayed all other gods and goddesses by giving such power to mortal beings?”

“I pity him because we are friends and relations,” Hephaestus started to say. But Might scared him — and Violence, who never said anything at all, scared him more. Hephaestus began working faster. He quickly bound Prometheus’s wrists and ankles with bronze shackles, and bound his body with a strong bronze chain that he nailed to the cliff. Soon Prometheus could not move at all.

“Let me see you hammer with your full force,” said Might. “The power of Zeus is great, and the anger of of Zeus is severe, so you better do a good job.”

“I’m doing what I have to do,” said Hephaestus. “There’s no need to tell me what to do.”

“Oh, I’ll tell you what to do,” said Might, mockingly. “Now get his legs secure.”

“Your words are as ugly as your looks,” muttered Hephaestus under his breath.

“You can soft-hearted if you want,” said Might, sounding dangerous, “but don’t cross me.”

Hephaestus gave one last blow with his hammer. “There, it’s done,” he said. “Now let’s go.” He left, and Violence followed him.

Might stayed behind for a moment. “That’s what you get for insulting the gods and goddesses by giving fire to beings who live for such a short time,” he said to Prometheus. “And are the mortals able to help you now? Your name means ‘Far-seeing,’ but it doesn’t look to me like you could see very far at all.” With that, he turned and left Prometheus alone, bound to the face of the desolate cliff.

When they all had gone, Prometheus groaned in misery. He did have the power of foresight, the ability to see ahead into the future. He had known that he would be chained on that cliff for what he had done, chained for many long years, wracked by pain, burned by the sun, frozen with the cold. He had stolen the fire anyway. Now here he was, groaning in pain, punished by Zeus for helping the human beings.

At last he stopped. “Why am I groaning?” he said to himself. “I foresaw this, and I must bear this punishment as well as I can. Yes, I gave the gift of fire to mortals. Yes, I took a small coal from the forge of Hephaestus, and hid it in a stalk of fennel so I could smuggle it down to the human beings. Giving that fire to mortals was the right thing to do. Fire has helped them learn new arts and sciences; fire has helped them become far more powerful. Zeus is afraid of human beings, afraid they will rival the gods and goddesses with their new knowledge. That is why I am bound here, riveted in bronze fetters beneath the wide sky. I did the right thing, and I’m not afraid to be punished for it.”

The immortal daughters of the god Oceanus flew to Scythia to talk with Prometheus and comfort him. Prometheus poured out his troubles to them, complaining about his fate, while they listened sympathetically. Then Oceanus himself, god of the ocean stream, came too, flying there on his winged horse.

Oceanus asked if there was anything he could do for Prometheus.

“What can you do except look at my suffering?” said Prometheus bitterly. “I was one of the friends of Zeus, and look at me now. I was one of the ones who helped him overthrow Cronus, helped him become the new ruler of the gods and goddesses. Yet here I am, punished cruelly by the one I helped to win power.”

“I see, Prometheus, and I’m sympathetic to you,” said Oceanus. “I want to give you some advice, because even though you are more clever than I, I am an older god than you. When there’s a new ruler of the gods and goddesses, you have to adapt to their rule. You’re going to have to adapt to the new rule of Zeus. Remember that if Zeus hears your bitter angry words, he can make things even worse for you. So take my advice and speak calmly. Our new ruler is a harsh god, and he doesn’t have to listen to anyone’s advice. Now if you will speak calmly, I will go and see if I can get Zeus to free you.”

“No, don’t go to Zeus,” said Prometheus. “Thank you for your loyalty, but you shouldn’t do that. You’ll just get in trouble, too. Go back home. Don’t let him become angry with you.”

Oceanus tried to argue with him, but Prometheus insisted that Oceanus should not go to Zeus. At last, Oceanus leapt back on his winged horse and flew away to his home.

This version of the story of Prometheus was adapted by Dan from the play Prometheus Bound, originally written by the ancient Greek poet Aeschylus. We looked at two other translations of Aeschylus’s play, by David Grene (University of Chicago Press, 1942); and by Herbert Weir Smyth (Loeb Classical Library, Harvard Universrity Press, 1926), and we referred to the exegesis offered by William R. Jones in his essay “Theism and Religious Humanism: The Chasm Narrows” (The Christian Century magazine, May 21, 1975). This story was originally published on Dan’s blog in 2012.

II/ Read the story “The Punishment of Prometheus.”

Now act out the story. Determine where the stage area will be. If there are any children who really don’t want to act, they can be part of the audience with you; you will sit facing the stage.

(1) In the story, the god Oceanus gives Prometheus some advice: Prometheus should just try to adapt to Zeus’s rule, and go along with what Zeus says. Then Oceanus says he will go to Zeus and see if he can get Zeus to free Prometheus. But Prometheus tells Oceanus No. If you were Prometheus, and Oceanus came to you and said he would try to get you freed — freed so you didn’t have an eagle tear your liver out every day, would you say NO? Why or why not?

Ask the children to THINK for a few moments (maybe ten seconds at most) about how they would answer this question.

(If you need to review how Think-Pair-Share works, a good summary of think-pair-share can be found at the following Web site — “ReadingQuest Strategies for Reading Comprehension: Think-Pair-Share.”)

Think-pair-share is a great way to help every child participate in a structured conversation. Now try to extend the conversation in a less formal manner. Here are some things to talk about:

If you need to fill more time, you could play a game of some kind. Just make sure you have everyone come together for a closing circle before you’re done.

When the children are in a circle, ask them what they did today, and prompt them with questions and answers, e.g.: “What did we do today? We heard a story, right? Anyone remember what the story was about? It was about Prometheus, right? What happened in the story? What was Prometheus thinking and feeling?” You’re not trying to put any one child on the spot, but rather drawing on the wisdom of the group as a whole. If any parents have come to pick up their children, invite them to join the circle (so they can know what it is their children learned about this week).