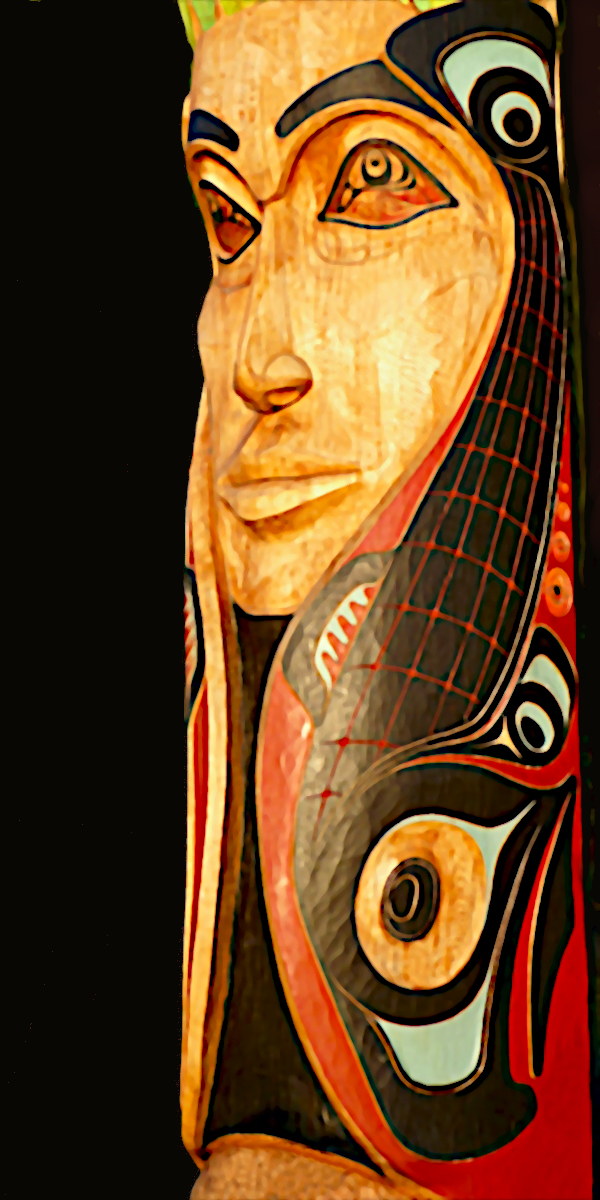 Public domain photograph of the Centennial Pole, dedicated in 2011 at the Sitka National Historical Park, Sitka, Alaska, showing the woman carved at the bottom of the pole. “The bottom figure…is a fascinating female portrait by Donnie Varnell, a Haida carver from…Ketchikan (Alaska). Flanked by male and female salmon, she represents Mother Earth.” (Mike Dunham, “Sitka’s Centennial Pole a showpiece of modern totemry,” Anchorage Daily News, June 6, 2014.) Since this story is a Tlingit tale of the Haida Gwaii, the islands of the Haida people, it seemed appropriate to use a Haida sculpture to illustrate the story.

7. The Red-Cedar Sculpture of the Woman Who Had Died

A Tlingit myth from Wrangell, Alaska

A young man and a young woman on the Haida Gwaii, the Islands of the Haida People, married. The young man was a chief, and the couple were very happy together. But soon after they were married, the young woman fell ill. Her husband sent around everywhere for the very best shamans, to try to cure her of her illness. He heard about a very fine shaman from another village on the island, and sent a canoe there to bring that shaman. But that shaman could do nothing. The young chief heard about another fine shaman at another village on another island, and again sent a canoe; but neither could that shaman cure the young woman. The young man sent for several fine shamans, but none of them could help his wife, and after she had been sick for a very long time she died.

The young chief felt very badly after his wife had died. He went from village to village to find the best wood-carvers in order to have them carve a sculpture of his wife. But though he asked several fine carvers, no one could make a sculpture that looked like his wife.

All this time there was a wood-carver in his own village who could carve much better than all the others. This man met the young chief one day and said, “You are going from village to village to have wood carved like your wife’s face, and you can not find anyone to do it, can you? I have seen your wife a great deal walking along with you. I have never studied her face with the idea that you might want some one to carve it, but I am going to try if you will allow me.”

The young chief came to the wood-carver’s workshop, and when he got inside, he saw his dead wife sitting there just as she used to look. This made him very happy, and he said he would like to take this sculpture home. “What do I owe you for making this?” he asked the wood-carver.

The wood-carver had felt sorry to see how the young chief was mourning for his wife, so he said, “Do as you please about it. It is because I felt badly for you that I made that. So don’t pay me too much for it.” But the young chief paid the wood-carver very well, both in slaves and in goods.

After a while the whole village learned the young chief had this sculpture of his wife. One by one, they all came to see it. It was so life-like that many people could not believe that it was not the woman herself until they had examined it closely and saw it was only made of wood.

Then one day the sculpture gave forth a sound like cracking wood. The man was sure something was wrong; perhaps the sculpture was ill. He had some people come and move it away from the place where it had been sitting, and when they had moved the sculpture they found a small red-cedar tree growing there on top of the flooring. The man left the young red-cedar tree to grow there, until it grew to be very large. (For many years afterwards, when people on the Haida Gwaii went looking for red-cedars, if they found a good one they would say, “This looks like the baby of the chief’s wife.” And it is because of the young chief’s wife that red-cedars on the Haida Gwaii provide the very best wood for carving.)

But to return to the red-cedar sculpture of the young woman:– The sculpture continued to grow more and more like a human being day after day. People from villages far and near heard the story, and came in canoes to look at the sculpture, and at the young red-cedar tree growing there, at which they were very much astonished. The red-cedar sculpture of the woman moved around as much as a tree trunk might move in the wind, which is to say not much at all, and the sculpture was never able to talk. Yet the woman’s husband had dreams in which she spoke to him, and even if the sculpture could not talk, it was through these dreams the husband knew his wife was talking to him.