In ancient Judea, a Scribe would have been a high-status person, one of the only people who was able to write. Note that the Scribe character probably would have felt aligned with the high-status Jewish leaders in Jerusalem, leaders who had made their accommodations with the Romans (particularly because the Romans rebuilt the great Temple in glorious style). Therefore, the Scribe character would be more likely to remain skeptical about Jesus of Nazareth.

In the scribe activity, apprentices are taught how to write Hebrew letters. If you can’t find someone to lead this activity who already knows how to write Hebrew, Wikipedia has a good article on the Hebrew alphabet. You might want to print out a sheet with all the letters of the Hebrew alphabet to make it easier for the apprentices to copy the letters.

The apprentices will learn how to write with a quill pen, made from a feather. The sketch below shows how to cut a feather to make a pen point. It’s worth noting that until the twentieth century, with the invention of steel-nib pens, all writing in the West was done with pens that you made yourself from either a feather (quill) or a reed. This is why a penknife is called a pen-knife — it has a small sharp blade suitable for cutting a pen point from a feather, and then making a small slit in the pen point to better carry ink. 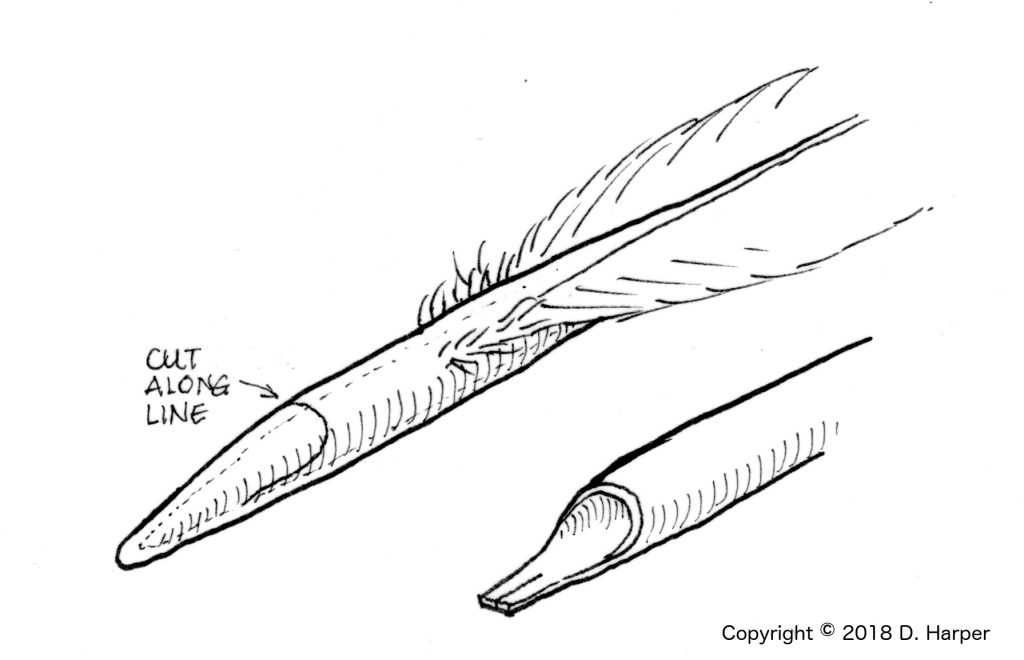 Most feathers have gunk inside them called “quick,” which you removed by poking it out with a piece of wire. You will also want to trim off the “barbs” (the feathery stuff) far enough up the shaft so that you can grasp the completed quill pen easily.

If you’ve never made a pen point from a feather, you will want to practice BEFORE you make one in front of your apprentices (you will want to make most of your quill pens in advance, but it’s fun to show apprentices how it’s done). Most art supply stores, such as the Michael’s chain, stock feather suitable for making quill pens; larger feathers with shafts 1/4 – 1/2 inches in diameter are best for small hands.

When you show your apprentices how to use the quill pen, show them how the pen must always be pulled. if you try to push the pen in the direction of the point, you will probably spatter ink everywhere, and you could break the point.

We keep some felt-tip calligraphy pens on hand just in case a child finds the quill pen too frustrating.