Foxes, Rabbits, and Leaves (age 9 and up; younger kids can play, too, in mixed age groups with plenty of older kids)

Another fairly complicated game, but once kids learn it, they will play for half an hour or more.

One person is the Referee. The Referee divides the group into Foxes, Rabbits, and Leaves. With a group of ten, have 4 rabbits, 3 leaves, and 3 foxes. Here’s how to tell the creatures apart:
— Leaves stand still with hands up at shoulder level (as if about to give a high-five)
— Rabbits have tails (pieces of white cloth to stick into back pocket, like flag football)
— Foxes have no distinguishing characteristic

The play area is a big circle. Rabbits have a Warren (a square of felt on the ground). They are safe from predation by the Foxes as long as they are touching the felt.

To begin each round:
— The Rabbits are all touching the Rabbit Warren
— The Leaves form a broad circle around the Rabbit Warren, standing with their hands up at shoulder level or higher
— The Foxes stand in the circle with the Leaves

When the signal is given to begin a round:
— Rabbits must try to leave the Rabbit Warren to “eat” Leaves by giving one Leaf a high five
— Leaves cannot move, except that as soon as a Rabbit eats them, they must put their hands down
— Foxes try to catch and “eat” Rabbits by pulling off their tails

A round lasts 3-5 minutes. At the end of the round, the Referee calls out “End of Round!” and all action stops.

The educational purpose of this game is to model how a surplus of predators in an ecosystem leads to starvation of predators; a surplus of herbivores can lead to a shortage of plants; etc. Or it can just be a fun game!

Moksha Patam (age 5 and up)

Moksha Patam is the classic board game from India upon which “Chutes and Ladders” is based. This game symbolizes the journey through life, and presents ideas of reincarnation, various virtues, etc.

Back in 2010, Sudha, a blogger living in Mumbai, wrote an excellent post on “Param Pada Sopanam,” another name for the same basic game, saying in part:

“Traditionally, Parama Pada Sopanam is played on the night of Vaikuntha Ekadashi (the 11th day after the new moon in the Tamil month of Margazhi). Many Hindus believe that the door to Vaikuntha, the abode of Lord Vishnu, will be wide open to welcome the devout and the faithful. Hindus also believe that dying on Vaikuntha Ekadashi will take them directly to the abode of Vishnu, liberating them from the cycle of rebirth. On this day, the devout stay up all night fasting and praying and playing the game helps them pass the time till dawn, when the fast is broken.”

For more cultural background on the game, read the entire post here.

Where to find Moksha Patam

(1) As of 2018, I was able to purchase a version of this game called “Param Pada Sopanum” form Kreeda, a games company based in India. International shipping charges cost more than the game, but the game itself was inexpensive; total cost was about $40. The quality was excellent, with a cloth game board, metal throwing sticks, and wood game pawns (see photo). The rules include brief stories described each of the mythological characters for which the snakes are named. 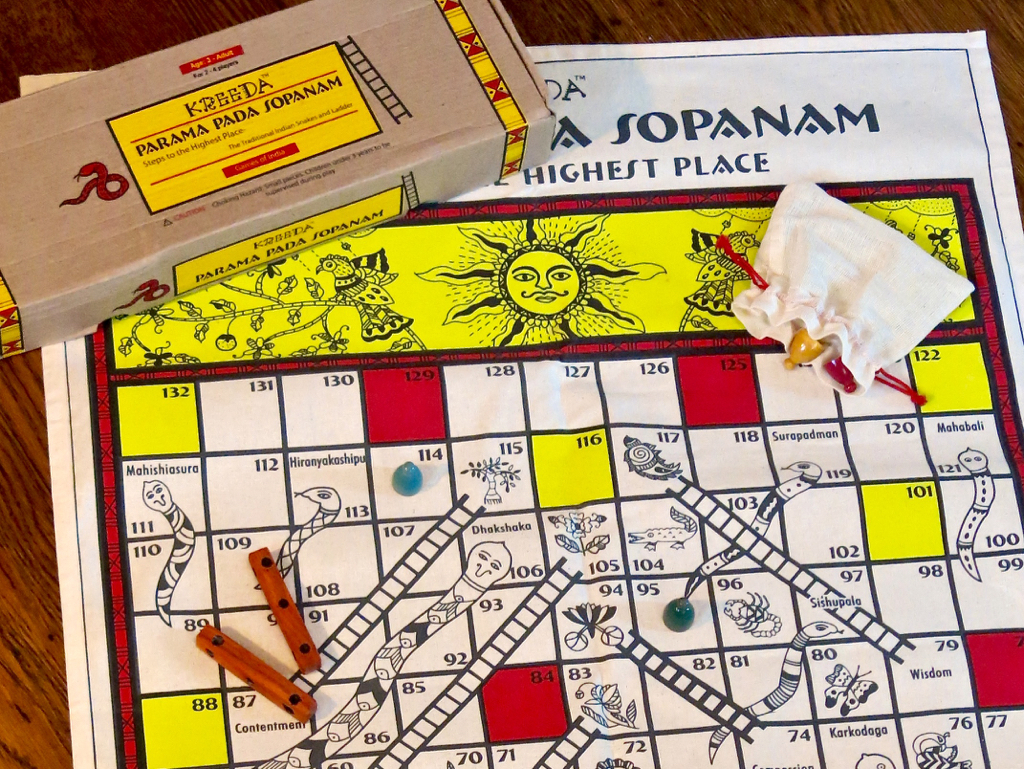 (2) Below is my small version of Moksha Patam game, designed to be played in a shorter time frame than the larger games, and which can be printed on 8-1/2 by 11 inch paper: 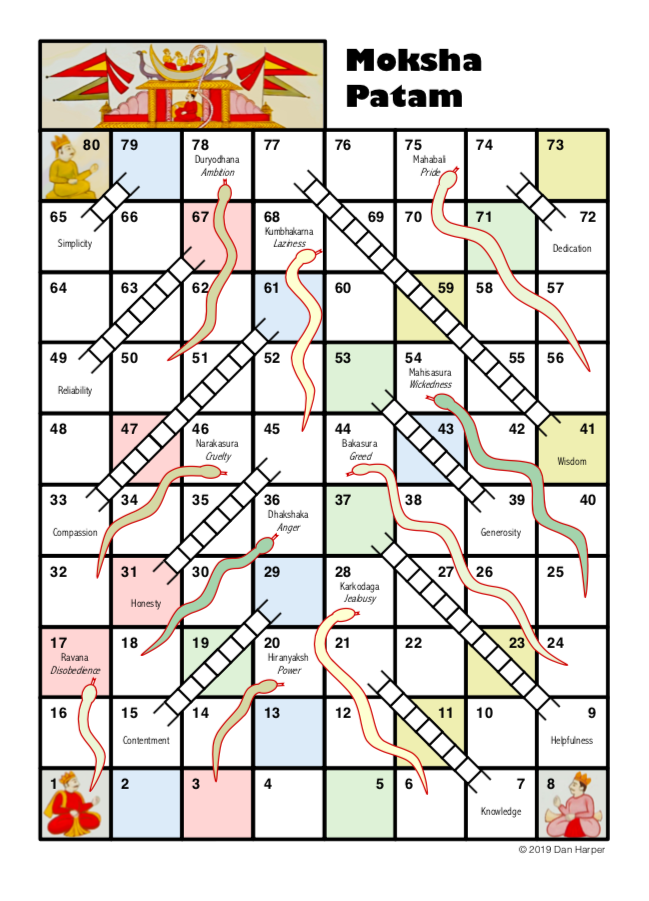 For a large (approx. 17 by 17 in.) version, print out these two PDF files, trim as needed, then tape them together to make a Moksha Patam game board. You will also need playing pieces and dice. 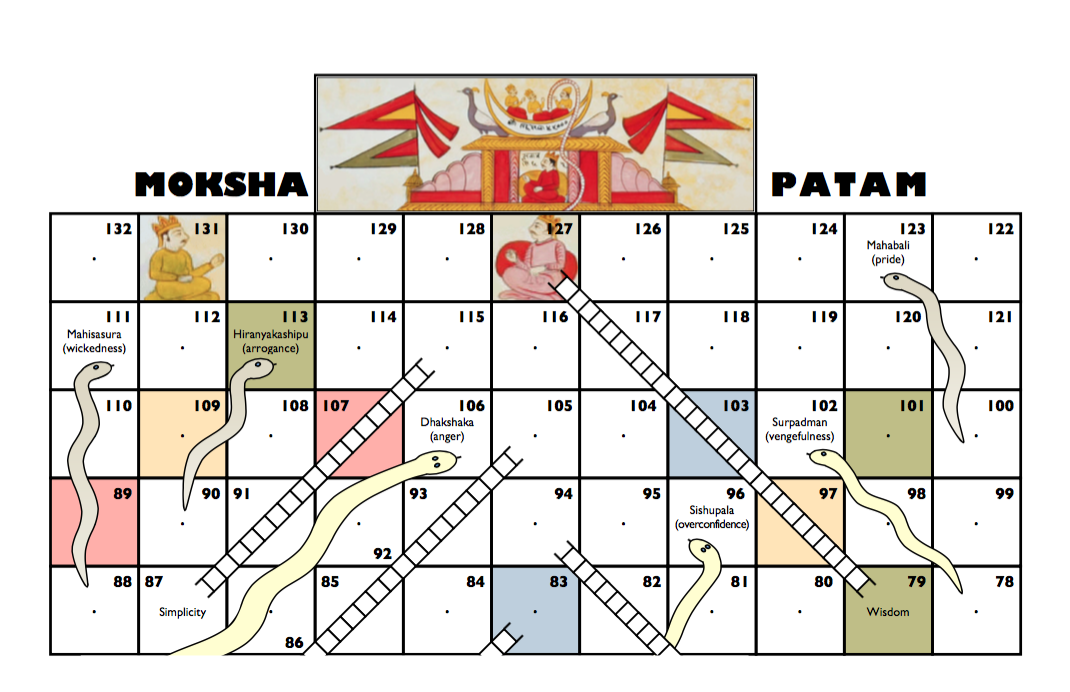 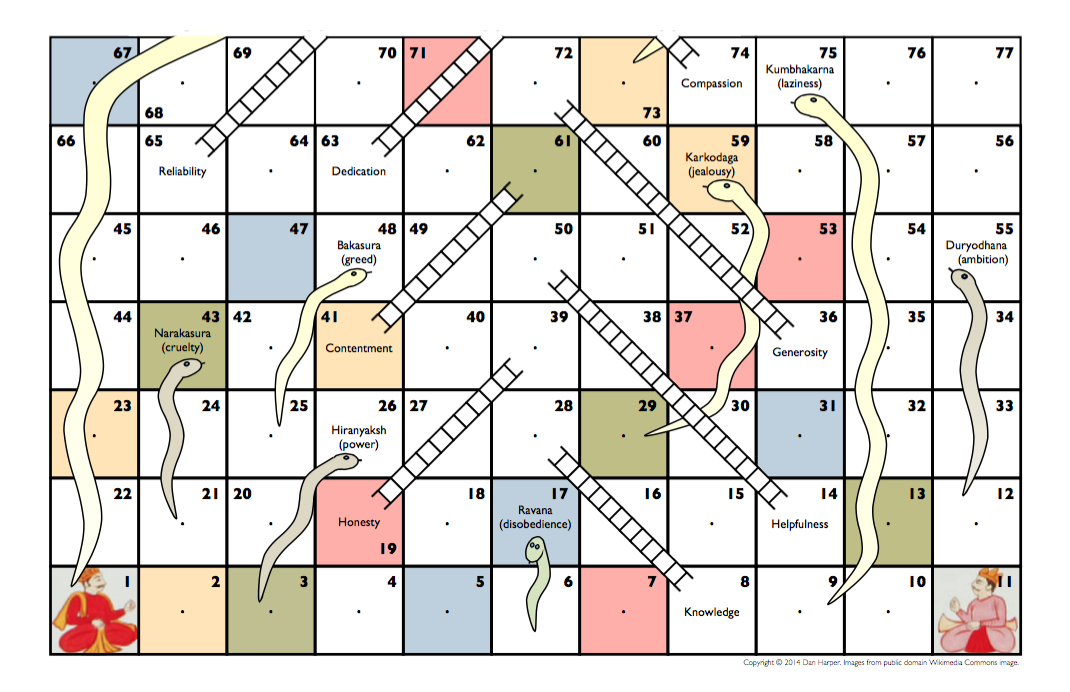 The goal of the game is to reach Nirvana, or Perfection — the highest place for a human being — which is shown at the top of the game board. This is a shorter version of the classic game, and is designed to be played in 15 to 20 minutes by 2 to 4 players (more players make the game last longer).

Equipment needed: In addition to the game board, you will need a standard 6-sided die and playing pieces. For playing pieces, you can use ordinary game pawns; but if you don’t have game pawns, coins (penny, nickel, dime, quarter) work well.

Duryodhana, the leader of the Kauravas, hoped to win power away from the Pandavas, his cousins. But his ambition caused him to cheat and murder. He was at last defeated in battle.

Mahabali was a good king at first, but he was so proud he thought he was better than anyone else. Because of his pride, he wound up dying when a giant boy pushed his head into the underworld, causing him to drown.

Kumbhakarma was a rakshasa, or demon, who was a great warrior. When he asked the gods for even greater strength, they caused him to stammer and ask for sleep instead. He slept for six months.

Mahisasura was the wicked son of a rakshasa, or demon, who wanted to kill off the gods. He gained the power that no male being could kill him. But after fighting with the gods, the goddess Durga killed him.

Narakasura was was an evil king who was conquered all the kingdoms of earth, and he ruled with great cruelty. At last Krishna defeated Narakasura in battle. (Some say that the holiday of Diwali is a celebration of the defeat of Narakasura.)

Bakasura was a demon who demanded that the nearby village bring him a great deal of food each week — then he would eat all the food, and the person who brought it, too. Finally Bhima killed this demon.

Karkodaga was a magical serpent. When Damayanti chose to marry Nala, Saniswara was jeal-ous. He got Karkodaga to bite Nala, causing Nala to forget he was married. Fortunately, Damayanti helped Nala regain his memory.

Ravana was a king who wanted Sita, even though she was already married to Rama. He kid-napped Sita, and this disobedience led to a battle between Rama and Ravana. Ravana lost the battle and was killed.

Hiranyaksh was a powerful demon who came to believe he was more important than the gods and goddesses. He let his power go to his head, and attacked Mother Earth. The god Vishnu then had to kill him.