THE BIRTH OF CONFUCIUS: A STORY FROM THE CONFUCIAN TRADITION

An alternative version of this story may be found in From Long Ago and Many Lands, available online through Google Books — click here. My version of the story included below follows the original sources more closely.

Once upon a time, some two thousand five hundred years ago, in a city in China called Tsou, there lived a man named K’ung Ho. He had been a soldier, though he was now long since retired, and he was so very tall that some people claimed he was at least ten feet tall.

At the time of this story, K’ung Ho was seventy years old. His first wife had died, leaving him the father of nine daughters. K’ung Ho loved all his daughters, but he had always hoped to have a son. So one day he went to the head of the noble house of Yen, and asked for one of their daughters in marriage. The youngest daughter, Yen Ching-tsai, said that she would be willing to marry this older man. And so the two were married.

Not long after the marriage, Ching-tsai traveled to Ni-ch’iu Mountain. This was a sacred mountain that Emperor Shun had dedicated to the worship of its guardian spirit. There Ching-tsai offered up prayers, hoping that she might give birth to a boy-child. That night, she dreamed that a spirit came to her and said, “You shall have a son, who will be a great sage and prophet, and you must bring him forth in the hollow mulberry tree.”

Not long after this dream, Ching-tsai did indeed become pregnant. One day while she was pregnant, she was resting and while she was resting five old men came up to her, leading behind them a unicorn — this was a Chinese unicorn, a K’e-lin, which is the size of a small horse, has one horn, and is covered in scales. The unicorn carried in its mouth a tablet made of green jade. On the tablet was carved a prophecy: “The son of the essence of water shall soon succeed to the withering Chou, and be a throneless king.” She tied a silk scarf around the unicorn’s horn, upon which the animal disappeared. She was not sure whether she had been asleep and dreaming, but she was sure what the prophecy meant: her baby would grow up to become wise and valued leader, even though he would never hold political office.

Soon it came time for Ching-tsai to give birth. She told her husband that she must give birth in the “hollow mulberry tree,” wherever that was. K’ung Ho said that there was a dry cave in a hill nearby named “The Hollow Mulberry.” Quickly they travelled to this dry cave so that the words of the spirit would be true, and her child would be born in a hollow mulberry tree. 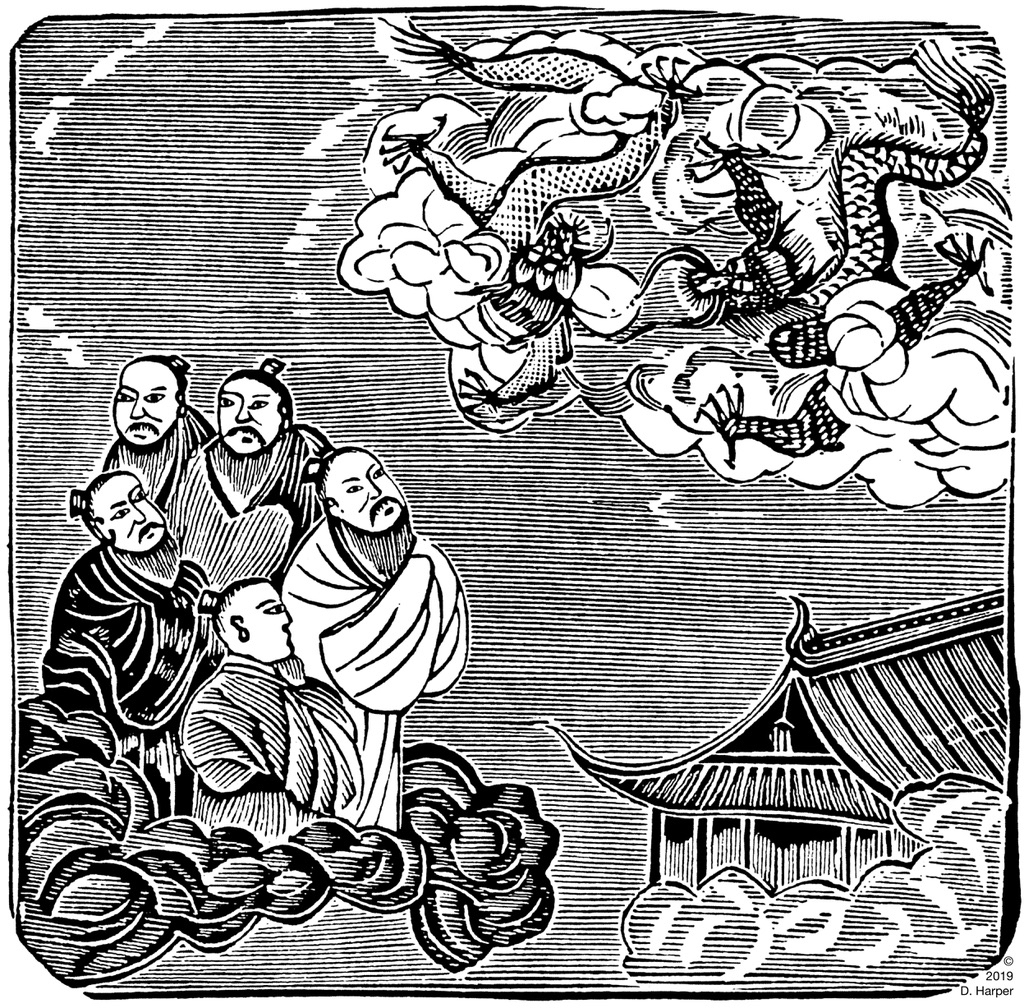 Above: The dragons and the five wise men at the birth of Confucius, adapted from The Dragon, Image, and Demon by Hampden C. DuBose (New York: Armstrong & Song, 1887), p. 92.

Within the cave, Ching-tsai heard music, and a voice saying to her: “Heaven is moved at the birth of your son, and sends down harmonious sounds.” A spring of water bubbled up within the dry cave, so that Ching-tsai could bathe her new baby. This also confirmed the prophecy that the new baby was the “son of the essence of water.”

After the baby was born, five old men came from afar to pay their respects to the new baby. Some people said they were the five old men of the sky, the five immortals who never die, and they had come down from the five planets to celebrate the birth of this great child.

This little baby grew up to be a great human being, a prophet and sage who was known as K’ung-fu-tzu, the Master or Teacher K’ung; or here in the Western world, he is best known to us by the name Confucius.

Confucius said that by the age of fifteen, he knew that he wanted to spend the rest of his life learning how to master one’s own self, and learning how we can live harmoniously with brothers and sisters, with our parents and children, with all those with whom we come into contact. He learned these things, and he began to teach others how to live wisely and well. Confucius grew so famous that leaders of nations invited him to come and teach them how to govern their nations fairly and wisely. Even today, some two thousand five hundred years after he was born, millions of people around the world still follow his teachings. 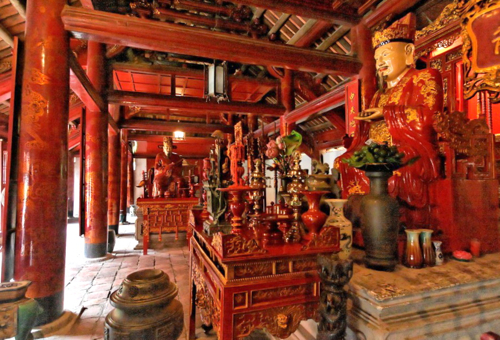 Above: An altar to Confucius in the Temple of Literature, a temple dedicated to Confucius, in Hanoi, Vietnam. The Temple of Learning, built around 1070 C.E., housed the first national university in Vietnam.

SESSION THREE: The birth of Confucius

II/ Read the story “The Birth of Confucius.”

I have provided an alternate version of the story above, which adheres perhaps a little more closely to the sources.

This week’s story is great fun to act out, and by now the children should be getting pretty good at doing so.

Ask: “Who are the characters in this story?” There are some great characters in the story, including Kung the Tall (Confucius’ father), Kung’s wife (who is not named in the story, but her name was Yan Zhengzai), the Unicorn, the two Dragons, the Five Old Men, and the baby Confucius. In addition, there is a Voice from the Sky, which could be everyone who doesn’t take one of the other roles. It is important to tell the children that Chinese dragons are not like Western dragons — Western dragons are often bad or evil, hoard gold, and kill people; but Chinese dragons are good, and wise, and omens of good fortune.

Determine where the stage area will be, and the lead teachers sits facing the stage. As usual, the lead teacher reads the story, prompting actors as needed to act out their parts. Depending on the size of the class, some children make take on more than one role (e.g., the Unicorn could also be a Dragon, and a Dragon could be one of the Five Old Men). Also, feel free to assign parts regardless of gender.

Children tend to like this story, so you may want to act it out twice, with different sets of lead actors each time.

Once again, it would be great to take photos, print them out later, and post them on the bulletin board in your classroom.

Ask some questions specific to the story: “How does is this story like the Christmas story of the birth of Jesus?” (Even though the story of the birth of Jesus is very much a part of popular culture, you may want to review it with the children, emphasizing miracles like the angel that tells Mary she will give birth to a boy, the friendly animals in the stable, the angels which appear to the shepherds, the Wise Men who bring gifts). “How true is this story — really true, sort of true, mostly made up but feels true, or what?” (Expect a range of answers for this last question.)

I like to tell children that while this story isn’t really true, because we know there are no such things as unicorns and dragons, there is truth in it. Confucius was one of the greatest people who ever lived, and so we like to imagine that there must have been miracles that happened when he was born. And, if you think about it, any time a child is born, it feels like a miracle — a whole new life has just started, and we can watch that baby grow up into a child, then a teenager, then an adult — it’s a miracle that a baby can do that!

V/ Drawing pictures and having snack

This is another great story to draw pictures of. You can find one artist’s idea of what the dragons and the four old men looked like below.

For U.S. children who may not be clear that there are different kinds of dragons, I’ve included an image of a Chinese dragon below (click on the image below for a larger version). This is from the Nine Dragons scroll by the Chinese artist Chen Rong, and was painted in the year 1244 C.E. (Public domain image from Wikimedia Commons.) Note the horns, and the absence of wings. Also, notice the benign expression: Chinese dragons are good, while Western dragons often are not at all good. 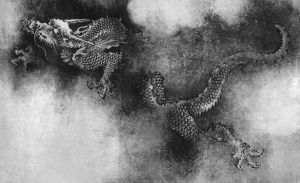 Ideas for free play: “Duck, Duck, Goose”; play with Legos; if weather is warm enough you might want to go out to the front play area; etc.

When the children are in a circle, ask them what they did today, and prompt them with questions and answers, e.g.: “What did we do today? We heard a story, right? Anyone remember what the story was about? It was about the miraculous birth of Confucius.” You’re not trying to put any one child on the spot, but rather drawing on the wisdom of the group as a whole. If any parents have come to pick up their children, invite them to join the circle (so they can know what it is their children learned about this week).