Back to Table of Contents | On to Session 4

THE GOLDEN CHAIN: A STORY FROM THE YORUBA TRADITION

The Yoruba peoples have lived in West Africa for more than fifteen hundred years. They were perhaps the most advanced civilization in Africa for much of their history; both their art and technology were superior to their neighbors. 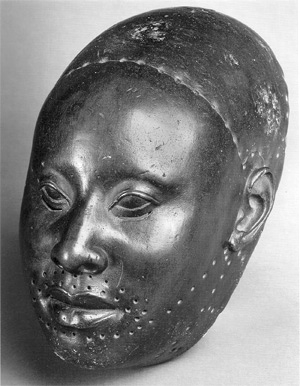 During the years when West African peoples were captured and sold into slavery, there were many Yoruba people who were sold into slavery in North and South America and in the Caribbean islands. The Yoruba people brought their religious traditions to the Americas, and continued to worship their own gods and goddesses.

Over time, the Yoruba religion came to be known by different names in different places. It is called Santeria in the Caribbean, Vodoun in Haiti, Candomble in Brazil, and Oyotunji in the United States. But all these different traditions give devotion to the orishas. An orisha is a heavenly being, like a god or goddess. Each orisha is identified with a Roman Catholic saint.

Olorun is the highest god, but human beings do not have direct contact with Olorun. Instead, human beings find ways of contacting the orishas, who in turn can contact Olorun. When a person needs help, she or he will visit a diviner who will offer advice on what to do. Often, the diviner will read the palm nuts, a traditional way of connecting with the orishas. Human beings also “make ebo” — offer sacrifices — at the shrine of one of the orishas, seeking the support and help of that ebo.

The following story, “The Golden Chain,” is one of many creation stories told by the followers of the orishas. 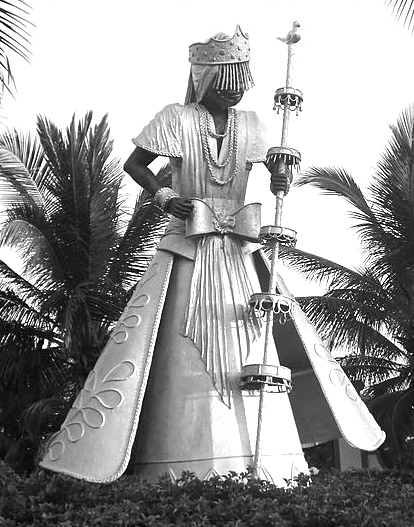 Long ago, well before there were any people, all life existed in the sky. Olorun lived in the sky, and with Olorun were many orishas. There were both male and female orishas, but Olorun transcended male and female and was the all-powerful supreme being. Olorun and the orishas lived around a young baobab tree. Around the baobab tree the orishas found everything they needed for their lives, and in fact they wore beautiful clothes and gold jewelry. Olorun told them that all the vast sky was theirs to explore. All the orishas save one, however, were content to stay near the baobab tree.

Obatala was the curious orisha who wasn’t content to live blissfully by the baobab tree. Like all orishas, he had certain powers, and he wanted to put them to use. As he pondered what to do, he looked far down through the mists below the sky. As he looked and looked, he began to realize that there was a vast empty ocean below the mist. Obatala went to Olorun and asked Olorun to let him make something solid in the waters below. That way there could be beings that Obatala and the orishas could help with their powers.

Touched by Obatala’s desire to do something constructive, Olorun agreed to send Obatala to the watery world below. Obatala then asked Orunmila, the orisha who knows the future, what he should do to prepare for his mission. Orunmila brought out a sacred tray and sprinkled the powder of baobab roots on it. He tossed sixteen palm kernels onto the tray and studied the marks and tracks they made on the powder. He did this eight times, each time carefully observing the patterns. Finally he told Obatala to prepare a chain of gold, and to gather sand, palm nuts, and maize. He also told Obatala to get the sacred egg carrying the personalities of all the orishas.

Obatala went to his fellow orishas to ask for their gold, and they all gave him all the gold they had. He took this to the goldsmith, who melted all the jewelry to make the links of the golden chain. When Obatala realized that the goldsmith had made all the gold into links, he had the goldsmith melt a few of them back down to make a hook for the end of the chain.

Meanwhile, as Orunmila had told him, Obatala gathered all the sand in the sky and put it in an empty snail shell, and in with it he added a little baobab powder. He put that in his pack, along with palm nuts, maize, and other seeds that he found around the baobab tree. He wrapped the egg in his shirt, close to his chest so that it would be warm during his journey.

Obatala hooked the chain into the sky, and he began to climb down the chain. For seven days he went down and down, until finally he reached the end of the chain. He hung at its end, not sure what to do, and he looked and listened for any clue. Finally he heard Orunmila, the seer, calling to him to use the sand. He took the shell from his pack and poured out the sand into the water below. The sand hit the water, and to his surprise it spread and solidified to make a vast land. Still unsure what to do, Obatala hung from the end of the chain until his heart pounded so much that the egg cracked. From it flew Sankofa, the bird bearing the sprits of all the orishas. Like a storm, they blew the sand to make dunes and hills and lowlands, giving it character just as the orishas themselves have character.

Finally Obatala let go of the chain and dropped to this new land, which he called “Ife”, the place that divides the waters. Soon he began to explore this land, and as he did so he scattered the seeds from his pack, and as he walked the seeds began to grow behind him, so that the land turned green in his wake.

After walking a long time, Obatala grew thirsty and stopped at a small pond. As he bent over the water, he saw his reflection and was pleased. He took some clay from the edge of the pond and began to mold it into the shape he had seen in the reflection. He finished that one and began another, and before long he had made many of these bodies from the dark earth at the pond’s side. By then he was even thirstier than before, and he took juice from the newly-grown palm trees and it fermented into palm wine. He drank this, and drank some more, and soon he was intoxicated. He returned to his work of making more forms from the edge of the pond, but now he wasn’t careful and made some without eyes or some with misshapen limbs. He thought they all were beautiful, although later he realized that he had erred in drinking the wine and vowed to not do so again.

Before long, Olorun dispatched Chameleon down the golden chain to check on Obatala’s progress. Chameleon reported Obatala’s disappointment at making figures that had form but no life. Gathering gasses from the space beyond the sky, Olorun sparked the gasses into an explosion that he shaped into a fireball. He sent that fireball to Ife, where it dried the lands that were still wet and began to bake the clay figures that Obatala had made. The fireball even set the earth to spinning, as it still does today. Olorun then blew his breath across Ife, and Obatala’s figures slowly came to life as the first people of Ife.

This creation story comes from the Yoruba people of Nigeria, Togo and Benin. In the religion of the Yoruba, the supreme being is Olorun, and assisting Olorun are a number of heavenly entities called orishas. This story was written down by David A. Anderson/ Sankofa, who learned it from his father, who learned it from his mother, and so on back through the Yoruba people and through time.

Session Three: A story from the Yoruba tradition

III/ Act out “The Golden Chain.”

By now, the children should be fairly adept at acting out the story.

Ask: “Who are the characters in this story?”

Once again, remember to take photos of the skit, and print them out from next week.

When the children are in a circle, ask them what they did today, and prompt them with questions and answers. You’re not trying to put any one child on the spot, but rather drawing on the wisdom of the group as a whole. If any parents have come to pick up their children, invite them to join the circle (so they can know what it is their children learned about this week).