Back to Table of Contents | On to Session 6

THE GARDEN OF EDEN: A STORY FROM THE ANCIENT NEAR EAST

These are the beginnings of the heavens and the earth, when they were created.

In the day that Yahweh made the earth and the heavens, when no plant of the field was yet in the earth and no herb of the field had yet sprung up — for Yahweh had not caused it to rain upon the earth, and there was no one to till the ground; but a stream would rise from the earth, and water the whole face of the ground — then Yahweh formed a man (in Hebrew, “formed a man” is said adam), from the dust of the ground (which in Hebrew is said adamah). Yahweh breathed into the man’s nostrils the breath of life, and the man became a living being.

And Yahweh planted a garden in Eden, in the east; and there he put the man whom he had formed. Out of the ground Yahweh made to grow every tree that is pleasant to the sight and good for food, the tree of life also in the midst of the garden, and the tree of the knowledge of good and evil.

Yahweh took the man and put him in the garden of Eden to till it and keep it (the name “Eden” means “pleasure and delight”). And Yahweh commanded the man, “You may freely eat of every tree of the garden; but of the tree of the knowledge of good and evil you shall not eat, for in the day that you eat of it you shall die.”

Then Yahweh said, “It is not good that the man should be alone; I will make him a helper as his partner.” So out of the ground Yahweh formed every animal of the field and every bird of the air, and brought them to the man to see what he would call them; and whatever the man called every living creature, that was its name. The man gave names to all cattle, and to the birds of the air, and to every animal of the field; but for the man there was not a helper to be his partner.

So Yahweh caused a deep sleep to fall upon the man, and he slept. Then Yahweh took one of the man’s ribs out, and closed up its place with flesh. Yahweh made the rib that had been taken from the man into a female human being, a woman, and brought her to the man.

Therefore a man leaves his father and his mother and clings to his wife, and they become one flesh. And the man and his wife were both naked, and were not ashamed.

Now the serpent was more crafty than any other wild animal that Yahweh had made. He said to the woman, “Did Yahweh say, ‘You shall not eat from any tree in the garden’?”

But the serpent said to the woman, “You will not die; for Yahweh knows that when you eat of it your eyes will be opened, and you will be like Yahweh, knowing good and evil.” 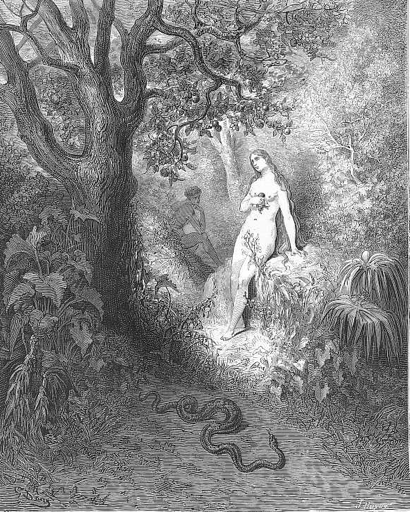 Above: Eve talking with the serpent, as imagined by the artist Gustav Dore. (Public domain image.)

So when the woman saw that the tree was good for food, and that it was a delight to the eyes, and that the tree was to be desired to make one wise, she took of its fruit and ate; and she also gave some to her husband, who was with her, and he ate. Then the eyes of both were opened, and they knew that they were naked; and they sewed fig leaves together and made loincloths for themselves.

They heard the sound of Yahweh walking in the garden at the time of the evening breeze, and the man and his wife hid themselves from the presence of Yahweh among the trees of the garden.

But Yahweh called to the man, and said to him, “Where are you?”

The man said, “I heard the sound of you in the garden, and I was afraid, because I was naked; and I hid myself.”

Yahweh said, “Who told you that you were naked? Have you eaten from the tree of which I commanded you not to eat?”

The man said, “The woman whom you gave to be with me, she gave me fruit from the tree, and I ate.”

Then Yahweh said to the woman, “What is this that you have done?”

The woman said, “The serpent tricked me, and I ate.”

Yahweh said to the serpent, “Because you have done this, cursed are you among all animals and among all wild creatures; upon your belly you shall go, and dust you shall eat all the days of your life. I will put enmity between you and the woman, and between your offspring and hers; he will strike your head, and you will strike his heel.”

To the woman, Yahweh said, “I will greatly increase your pangs in childbearing; in pain you shall bring forth children, yet your desire shall be for your husband, and he shall rule over you.”

And to the man, Yahweh said, “Because you have listened to the voice of your wife, and have eaten of the tree about which I commanded you, ‘You shall not eat of it,’ cursed is the ground because of you; in toil you shall eat of it all the days of your life; thorns and thistles it shall bring forth for you; and you shall eat the plants of the field. By the sweat of your face you shall eat bread until you return to the ground, for out of it you were taken; you are dust, and to dust you shall return.”

The man named his wife Eve, because she was the mother of all living (in Hebrew, “Eve” resembles the word for living). And Yahweh made garments of skins for the man and for his wife, and clothed them.

Then Yahweh said, “See, the man has become like one of us, knowing good and evil; and now, he might reach out his hand and take also from the tree of life, and eat, and live forever.”

Therefore Yahweh sent the man forth from the garden of Eden, to till the ground from which he was taken. He drove out the man; and at the east of the garden of Eden he placed the cherubim, who were angelic guardians of fearsome appearance, wielding swords that flamed and turned to guard the way to the tree of life. 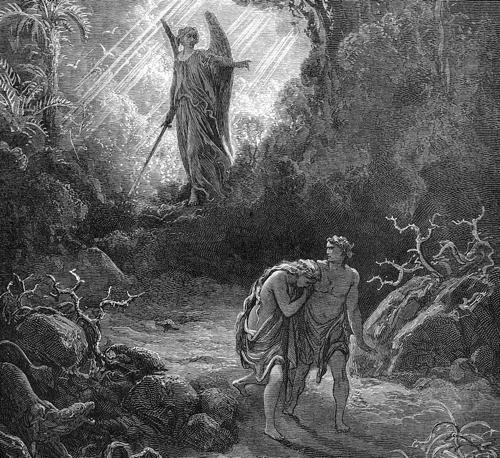 Above: Adam and Eve driven out of the Garden of Eden, as imagined by the artist Gustav Dore. (Public domain image.)

Session Five: Another story from the Hebrews of Palestine

II/ Read the story “The Garden of Eden.”

III/ Act out “The Garden of Eden.”

Be sure to take photos of the skits, and print them out to be posted on the class bulletin board next week.

Here are some questions which you might use to start a brief conversation:

Did Yahweh tell the truth when he said that the humans would die if they ate from the fruit on the trees?

Did the Serpent really trick Eve, or did he tell her the truth about the apples? Or did he both trick her, and tell the truth?

Many times, people have to make decisions when they don’t have all the information they need to make the decision. When Eve had to decide whether or not to eat the fruit from the tree, she didn’t really know who was telling the truth — Yahweh, or the Serpent. Do you think she made a good decision, based on what she actually knew?