Back to Table of Contents | On to Session 3

THE FLOATING BRIDGE OF HEAVEN: A SHINTO STORY FROM JAPAN

The people of Japan have lived for centuries on eight large islands and many smaller islands that lie off the coast of China. For many years, they kept themselves separate from the rest of the world, living on their island, and avoiding contact with foreigners.

If you have ever watched the sun rise or set over the ocean you will know why the Shinto religion feels so much reverence for the sun. If you were to imagine the best dwelling place for the greatest and most beautiful of the gods and goddesses, you could think of none more glorious than in the brightly-colored skies of sunrise or sunset.

Two of the oldest of Japanese books are the Kojiki and the Nihongi. The Kojiki was written in the year 712 C.E., and the Nihongi was written in the year 720 C.E. Both books contain old myths and legends from various parts of Japan. While both these two books are held in great honor by those who follow the Shinto religion, most people would not be able to recite any passage from them, nor would most people even read them.

The first chapter in the Nihongi tells of the creation of the world, and it tells about the powerful sun goddess Amaterasu (Ah-mah-ter-ah’-soo).

Above: Izanagi and Izanami. (Public domain image from Wikimedia Commons.)

The Floating Bridge of Heaven

The Web version of the story is currently under development. A version of this story is available in Beginnings: Earth, Sky, Life, Death by Sophia Fahs.

Above: Amaterasu emerging from the cave. (Public domain image from Wikimedia Commons.)

II/ Read the story “From the Floating Bridge of Heaven.”

III/ Act out “From the Floating Bridge of Heaven.”

This is a more complicated story than last week, and we will build the skills of the children in remembering the story, and acting out as accurately as possible.

Ask: “Who are the characters in this story?”

The lead teacher reads the story, prompting actors as needed to act out their parts. Actors do not have to repeat dialogue, although some of them will want to do so. The lead teacher may wish to simplify the story on the fly, to make it easier to act out. You will notice that this story is in two parts: the creation of the world by Izanagi and Izanami; and the Amaterasu story.

Once again, take photos with a digital camera, and print them out to be posted on the class bulletin board.

Ask some questions specific to the story: “In this story, the sun goddess is a woman do you think of the sun as being male, or female, or neither? Why did Amaterasu get angry with her brother? Why did she hide in her cave? How would you have tempted her out of the cave?” — or questions you come up with on your own.

One of the most important aspects of this story is the beauty that is created into the world. If there are older children in the group, you might want to address the beauty. Perhaps you could ask something like this: “In the first part of this story, Izanagi and Izanami created the world using a jeweled spear; and the world they create is very beautiful. What seems most beautiful to you about the world they create?”

When the children are in a circle, ask them what they did today, and prompt them with questions and answers, e.g.: “What did we do today? We heard a story, right? Anyone remember what the story was about? It was about the Moon and the Hare, etc.” You’re not trying to put any one child on the spot, but rather drawing on the wisdom of the group as a whole. If any parents have come to pick up their children, invite them to join the circle (so they can know what it is their children learned about this week). 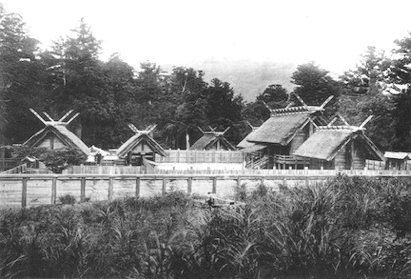 Above: The Shinto shrine at Ise, dedicated to Amaterasu. 1910 photograph (Public domain image.)