Back to Table of Contents | On to Session 5

THE FIRST SEVEN DAYS: A STORY FROM THE ANCIENT NEAR EAST

This story can be found in the Hebrew Bible, in the very first book of the Bible — the book of Genesis. “Genesis” is an ancient Greek word meaning “beginnings.”

When this story was first told we cannot say. The storytellers who repeated the stories imagined the world as being flat and circular. They thought of the sky as a great high dome covering the top of the earth, and of the sun, moon, and stars as lights fastened to that dome. Above that dome, they imagined water, and rain came when windows in this dome were opened and some of the water fell to earth as rain. They imagined their God lived above the ocean that was above the dome of the sky, but he could come down to earth any time he wished. Like the ancient Greeks, they imagined an underworld (which they called “Sheol” and the Greeks called “Hades”), a place where you would go after you died. The way they imagined the universe was poetical rather than scientific. They were not trying to state scientific knowledge about the world. Instead, they were trying to express their poetic understanding of the place human beings inhabited in the universe. We human beings have always felt as though we are the center of the universe, and that’s just where the ancient Hebrews placed humankind — at the center of the universe. 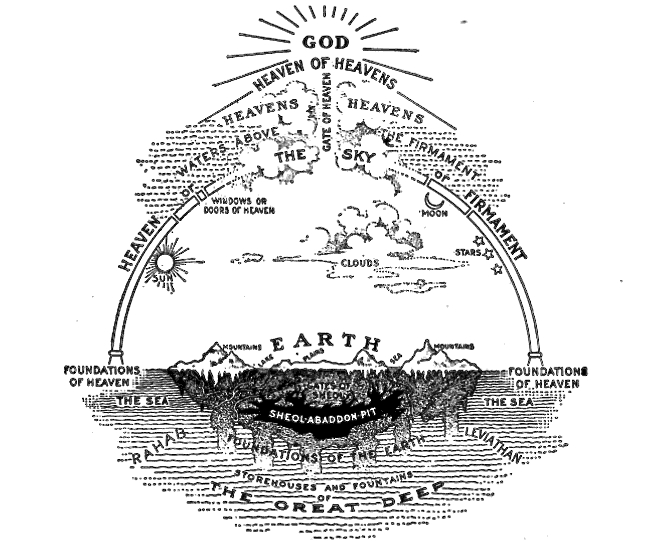 These stories were first written in the Hebrew language. In Hebrew, their name for their god in these stories is “Elohim” (E-loh’-heem). The story following this one will also be from the Hebrew Bible, and in that story the Hebrew god is called by another name, Yahweh (Yah’-way). It is thought that the different names for God show that these old stories were originally told by different people, and then later they were both included when the Hebrew Bible was written down based on many such old stories. Yet even though the stories use two different names for the Hebrew god, they represent the same basic god — a creator who existed before the world began, and brought into being all that is.

Above: The first day of creation, as imagined by artist Gustav Dore. (Public domain image.)

The First Seven Days of Time

Once upon a time that had no time, a being lived in a place that wasn’t really a place. This being did have a name, but the being’s real name cannot be spoken. Because of this, it’s easiest to call the being “Elohim.”

Before time began, before you could even say there was a before, or an after, Elohim looked around, and saw that nothing had any shape or form to it. All around Elohim, it was just nothingness. Or perhaps there was water, and there was wind, and the wind was Elohim. Either that, or Elohim seemed like wind and all around Elohim was everything that ever was, or is, or could be, but it was all mixed up together as if it were a vast ocean.

Elohim decided to separate out light from darkness, and when Elohim did that, time began. Elohim looked at the light and the darkness, decided that they were good. Elohim called the darkness “Night,” and the light “Day,” which meant there now was evening and morning, and that was the first day of all time. But no one knows how long that first day lasted, for in the beginning time did not flow in the same way it does now. 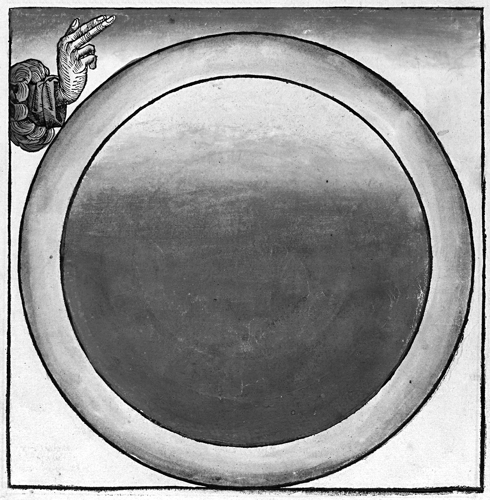 Above: The first day of creation, as imagined by an artist in the Nuremberg Chronicle, 1491. (Public domain image from Wikimedia Commons.)

Eventually Elohim wanted more than just light and darkness, night and day. Elohim separated out some of the water, and made it into a big dome that arched above the rest of the water. Elohim called the big dome the “Sky.” Time moved on, evening came, morning came, and another day passed. But no one knows how long that second day lasted.

When it was time for another day to begin, Elohim gathered together the water that lay under the sky, which meant there was room for dry land to come forth. Elohim called the dry land “Earth.” Elohim asked the dry land to grow plants, and plants grew. All kinds of plants, small plants with seeds, and plants that have spores instead of seeds, and trees, and every kind of plant grew up out of the Earth. It must have taken a long time for all the plants to grow. But time still hadn’t settled down into a regular rhythm yet. Evening came, and morning came, but how long did they last? The plants grew and grew, for a long, long time, but it only took a day. That was the third day.

On the fourth day, lights appeared in the dome of the sky, a big bright light, a smaller dimmer light, and lots and lots of tiny little lights. Elohim put all the lights in the dome of the sky. The big, bright light came out in the day. When evening came, the smaller, lesser light came out, and so did all the stars. These lights in the sky lit up the earth, and helped to separate out light from darkness because now there could be days and nights, and seasons, and years. Elohim looked at everything, and felt that everything was good. No one knows how long that fourth day took, but at last it was done.

The next morning, which was the fifth day, living creatures started to live in the waters, and birds started to live in the skies. Elohim created every kind of animal that lives in the water, and every kind of winged creature that flies in the sky. Elohim told them that they could have babies on their own. Elohim told the sea creatures to fill up the waters, and the birds to settle down on earth. It took one day to create all these creatures, but no one knows how long that fifth day lasted. For all we know, the fifth day and night lasted so long we would call it a million years.

On the sixth day, Elohim decided that the land needed more creatures, so Elohim told the earth to bring forth animals. Elohim made all kinds of animals, from mosquitoes to tigers. Elohim liked all the animals.

After that, Elohim told all the animals, and the human beings, that they could eat the plants that had come forth from the earth. “Everything that has the breath of life,” said Elohim, “shall eat plants for food.” That was the end of the sixth day. It must have been a very long day, but once again no one knows just how long that day lasted.

At last, Elohim felt that everything was finished. Now there was light and darkness; and the dome of the sky; and the oceans and earth with green plants; and sun and moon and stars; and creatures of the water and of the air; and creatures who lived on dry land including human beings.

But not quite everything was finished. On the seventh day, Elohim made a different kind of day. Elohim blessed this seventh day and rested, and Elohim admired light and dark and day and night, the sky and the water, the plants growing on dry land, the sun and the moon and the stars, all the creatures in the water and all the birds in the air, the animals and the human beings. Some people say that Elohim liked everything that existed, but felt there needed to be a reason for everything to exist, and that was why Elohim made the seventh day.

Session Four: A story from the Hebrews of Palestine

II/ Read the story “The First Seven Days of Time.”

III/ Act out “The First Seven Days of Time.”

By now, the children should be fairly adept at acting out the story. But this story doesn’t have as clearly defined characters, and it may prove to be more challenging. Acting out this story is less like a skit, and more like interpreting the story through movement.

Children often find it fun to illustrate this well-known story. The most obvious thing to do is to have each child illustrate one day (if you have more than seven children, the later days can be broken up, e.g., creating animals, creating plants, creating humans, etc.).

As you all start to draw, it might be helpful to refer to the drawing of the ancient Hebrew conception of the universe, especially for those who are drawing the first and second days.

The completed illustrations should be added to the class bulletin board, next to the photos of skits that are already posted there.